The MS-06 Zaku II (ザク II, MS-06 Zaku II?) is a line of mobile suits first appeared in Mobile Suit Gundam and since then has been features in several other works set in the Universal Century timeline.

The successor to the first fielded MS, the MS-05A Zaku I Early Type, the Zaku II improved on everything the previous model offered. It was faster, more durable, had a superior Minovsky Reactor, and could be fitted with more weapons. The Zaku II was the mainstay of the Zeon military for most of the One Year War. Even after the MS-09B Dom and MS-09R Rick Dom began to replace it on the front lines, the Zaku II still remained the most numerous mobile suit in Zeon's armed forces. As such, the Zaku II formed the backbone of the U.C. 0083 rebels of Operation Stardust and some were even seen as late as U.C. 0088 in both AEUG and Neo Zeon service during the Gryps Conflict and the First Neo Zeon War. The Zaku II was also a common aggressor unit used during training for Earth Federation Forces pilots.

A standard weapon for Zaku-type mobile suits. It is a shell firing gun that does not require energy to be used; however, its effectiveness against heavy armor is very limited. The ZMP-50D used a 100-round drum magazine. "ZMP" stands for "Zaku Machine Pistol".

An alternative to the MMP-78, it is an upgrade of the above weapon. It used 90mm bullets instead of 120mm type, allowing for a greater firing speed and better penetration capabilities. Fed by a 32 rounds magazine, it is also integrated with a grenade launcher under its barrel for more firepower.

A model of the zaku machine gun where the hand grip has been tailored to fit the size of the manipulators belonging to the Dom series. The grenade launcher is also detachable.

The main gun of the HT-01B Magella Attack main battle tank, it is remodeled as an MS artillery weapon. It was mainly used for long distance ground combat and can be loaded with high-explosive anti-tank (HEAT) or armor-piercing fin-stabilized discarding-sabot (APFSDS) rounds.

Identical to those used by infantry, cracker grenades are explosive weapons designed to be thrown or launched by the MS and detonate after a set amount of time. The "cracker" then breaks into several smaller munitions over a wide area. The Zaku II can optionally equip up to four cracker grenades, that are stored on the left and right waist armor racks, with two on each side.

Hand Grenades are throwing weapons used as an alternative to Cracker Grenades. These waist-mounted grenades can be thrown like regular grenades and set to detonate upon impact with the target or timed to explode after a preset time. They come in multiple variants, allowing them to perform different roles in battle.

A weapon originally developed for the MS-09R Rick Dom. The bazooka has its own internal reactor, rather than an E-cap, and is, essentially, a Musai deck gun scaled down for mobile suit use. Due to using a reactor rather than an E-cap, the bazooka is capable of a single sustained blast or several short bursts, requiring a lengthy recharge period of approximately 10 minutes before it can be used again.

A weapon from the MS-07B-3 Gouf Custom, it is a shield with a powerful, drum-and-belt fed, 75mm Gatling Gun attached to it. The Gatling Gun can be detached from the shield when it runs out of ammunition.

A new heavy bazooka which features powerful rocket-propelled rounds, and improved targeting sensor with protective cover for aiming. It is fed by a 5-rounds magazine.

The MS-06 Zaku II series was one of the most produced and versatile mobile suits of the One Year War. Even after its performance was surpassed by its successor mobile suits, like the MS-07B Gouf, the MS-09B Dom, and the MS-14A Gelgoog, it was still widely deployed both on the front lines and behind the scenes after the war's end. During the First Neo Zeon War, the Zaku II was still used by Haman Karn's Neo Zeon forces, but it in less of a combat role and more of a support and defense role. 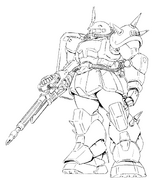 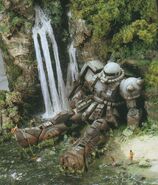 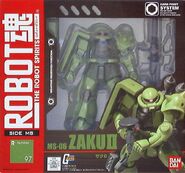 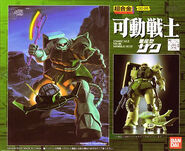 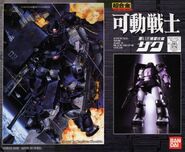 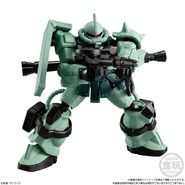 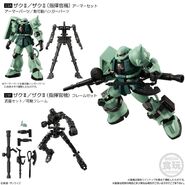 Retrieved from "https://gundam.fandom.com/wiki/MS-06_Zaku_II?oldid=432032"
Community content is available under CC-BY-SA unless otherwise noted.