The MS-06 Borjarnon is a Mobile Suit used in the Correct Century timeline by the Luzianna Militia. It bears a heavy resemblance to the MS-06 Zaku II of the Universal Century,[1] but is only a replica.[2] Indeed, it could be seen by the different way the cockpit opens. 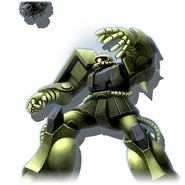 
Cite error: <ref> tags exist, but no <references/> tag was found
Retrieved from "https://gundam.fandom.com/wiki/MS-06_Borjarnon?oldid=428234"
Community content is available under CC-BY-SA unless otherwise noted.