One of the prototype machines developed by the Principality of Zeon under the "Bishop Plan", this mobile suit was also referred to by the name of this project. The Bishop Plan was part of Zeon forces' research into remote weaponry controlled by a Newtype's special brainwaves, with the plan's end goal being a machine with the model number of MS-16X and the name "Zeong". Since the One Year War was dominated by visual combat, it was hoped that if this plan was realized, it would introduce tactics comparable to the old style of electronic warfare. Equipped with a prototype of the psycommu system, the Psycommu System Zaku was one of three test machines prepared for collecting data and testing beam weapons at that time, with the other two being a medium-sized fighter, and the Braw Bro.

The Psycommu System Zaku is based on the Zaku II F-Type, but only the main frame is used, and with the exception of the head, it bears little similarity to the Zaku II. Even then, the head has been modified with a monitor camera that can rotate to the rear and top, widening its search area. The mobile suit's body was also enlarged slightly as the power pipes have been internalized, similar to the MS-14. Together with a larger generator in the upper body, the Psycommu System Zaku was also installed with additional propulsion engines. As a result, the mobile suit has one high output rocket engine on each side of the chest and three more on its back, achieving a total thrust of 388 tons. However, its operating time was only about 10 minutes, and its ability to be used on the battlefield was questionable.

The mobile suit's legs were mainly for landing and were considered to be virtually useless in space. Its arms were used as support units for detachable, wire-guided beam cannons, which were attached below the elbows. These beam cannons were designed according to the Zeong's specifications, and because of this, the Psycommu System Zaku's arms appear to be unusually large, reminiscent to those of a mountain gorilla. A total of three Psycommu System Zakus were built, with the second unit later upgraded into the Psycommu Test High Mobility Type Zaku.

Equipped with a powerful mega particle cannon installed in each finger, the forearms of the Psycommu System Zaku can be detached from its elbows and function as wired remote weaponry, enabling all-range attacks. The Wired 5-barrel Mega Particle Cannon can easy sink a battleship in a single attack.

Three Psycommu System Zakus were loaded onto the experimental ship Lemuria from Granada, and transported to Corregidor for operational testing. The second unit was later converted into the Psycommu Test High Mobility Type Zaku, and the fourth, which was manufactured from spare parts, was given to Annerose Rosenheim of Zeon's Marchosias MS regiment and participated in the battles of Solomon and A Baoa Qu. 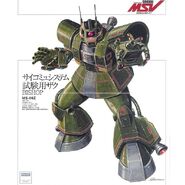 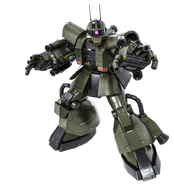