The MS-06V Zaku Tank is an artillery ground combat mobile suit and is one of many variants of the standard MS-06 Zaku II. It was first featured in the original design series Mobile Suit Variations (MSV) and later, animation series including Mobile Suit Zeta Gundam, Mobile Suit Gundam ZZ, and Mobile Suit Gundam: The 08th MS Team.

As the One Year War dragged on, the Zeon forces found themselves in desperate need of replacement mobile suits and other weaponries. Forced to salvage whatever they could, field workshops would often disassemble inoperable machines for use as replacement parts and cobble together new units from whatever was available in order to get more combat units to the field. One of the most common variations was the Zaku Tank, created from mounting a Zaku torso, head and arms onto the hull of a Magella Attack Tank. These units were prized by field commanders, starved for replacement mobile suits and used for both combat and support duties. Since the Zaku Tanks were constructed to cater local military needs, there were no single unified design and a variety of chassis and equipment existed. The most commonly known chassis utilized the upper torso from MS-06 Zaku II series, but torso from MS-05 Zaku I series were also used.

The 3-barrel 35mm Machine Gun was the original weapon for Magella Attack Tank and was located in front of its tank platform against enemy infantry and light armored vehicles and targets.

For variants of Zaku Tanks with normal arms and manipulators, they could utilize firearms normally used by the Zaku series such as the ZMP-50D 120mm Machine Gun, MMP-80 90mm Machine Gun, etc. to enhance its firepower.

The Zaku Tank featured in Gundam Build Fighters was equipped with a pair of 3-tube Missile Pods which are located on the side of its Shoulder Shields. The Missile Pods were inherited from MS-06J Zaku II Ground Type and they were quite effective against armored enemies. However, they were also slow and unsuited for combat against nimbler targets.

Zaku Tanks could be equipped with different types of claw arms for construction, heavy lifting, repairs or delicate works. They could also be used as bludgeoning weapons when necessary.

Specialized backpacks utilized from other models, such as the one from the MS-06K Zaku Cannon with a 180mm artillery gun, can be fitted for corresponding purposes.

Localized version of the Zaku Tanks had been fielded by Zeon Arm Force across the Earth during the One Year War. During the events in Gundam: The 08th MS Team OVA, Eledore Massis and Michel Ninorich of E.F.F.'s Kojima Batttalion utilized a MS-05-based Zaku Tank to escape from their Zeon captors, as well as destroying an Armored Vehicle.

After the end of One Year War, many captured Zaku Tanks were employed at the Federation bases across the Globe, including its Jaburo headquarters in South America. 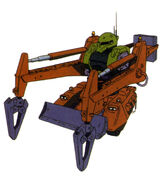 Rear view, as seen on The 08th MS Team OVA 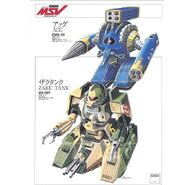 Zaku Tank (right) as featured in Zeon MS Boys: The War of Independence