The MS-06V-6 Zaku Tank Green Macaque is a variation of the MS-06V Zaku Tank that first appeared as part of the Kunio Okawara's Mobile Suit Variations (MSV) mechanical design series. Later the design was animated and made a cameo appearance in the Mobile Suit Gundam Unicorn OVA.

Named for its distinctive green camouflage, the Zaku Tank Green Macaque was an experimental version of the Zaku Tank developed mainly for obstacle-clearing roles. It's fitted with large manipulator arms different than those of the standard model. Other than that, its only other mean of self-defense is a 8-tube missile launcher.

Replacing the torso-mounted 3-barrel 35mm Machine Cannon of the original Zaku Tank is a missile launcher. This would be used for long to mid-range bombardment.

The Zaku Tank Green Macaque were equipped with a pair of specialized claw arms which were bigger than those of MS-06V Zaku Tank. They were used primarily for obstacle clearance in jungle environment. They could also be used as bludgeoning weapons when necessary.

The Zaku Tank Green Macaque was fielded near the end of One Year War. It was known to be sortied in the jungle of Borneo, Southeast Asia.

In U.C. 0096, a Zeon Remnants' Zaku Tank Green Macaque was seen assisting a MS-06D Desert Zaku in lifting the Neo Zeon's space freighter Garencieres out of the Sahara Desert in Africa.

A combat variant of Zaku Tank Green Macaque, with the back-mounted crane being replaced by the 180mm Cannon backpack used by MS-06K Zaku Cannon. 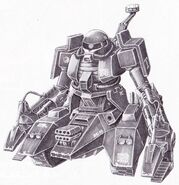 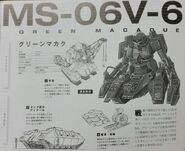 Retrieved from "https://gundam.fandom.com/wiki/MS-06V-6_Zaku_Tank_Green_Macaque?oldid=497990"
Community content is available under CC-BY-SA unless otherwise noted.