MS-06S Char's Zaku II is a mobile suit featured in the Mobile Suit Gundam: The Origin manga and its OVA adaptation. It was piloted by Char Aznable during the One Year War.

Char's MS-06S Zaku II is a customized version of the standard MS-06S Zaku II Commander Type (an overall improved MS-06F Zaku II) painted in his personal red colors[1][2]. Being a commander's unit, a horn-like decoration was also attached to its head[1]. Despite the high risks, Char personally ordered the removal of its limiters, allowing it to use its thrusters to the maximum limit[1]. The hit-and-run tactics enabled by the resulting high thrust, and the impression its distinctive colors made on the battlefield, led to Char's nick name, "Red Comet"[1]. After the Clash of Loum, Vice Admiral Dozle secretly ordered Char to command the Falmer, a custom Musai-class battleship, and unit emblems and victory markings were applied to his MS-06S.[2][3] These included bright white lines indicating it as the commander's unit, the unit number "A12" and emblems of the Falmer.[2][3]

A defensive equipment made of steel and multiple types of shock absorption material. It is fitted with weapon latches, which can be used to hold two spare magazines for the bazooka or various types of weapon.

A pair of fixed armaments mounted in the chest, they are mostly used to destroy fighter jets and small vehicles, or intercept missiles.

A sniper rifle mainly used against warships. It discharges specialized rounds at a high initial velocity, which can split into submunitions after penetrating a warship's armor, destroying it from within. It is especially devastating when used against the bridge or engine of a ship.

A large bazooka mainly used for anti-ship combat, it can hold three shells in the magazine near the back. It is mounted on the weapon latch on the backpack when not in use.

Two type of machine guns for MS can be equipped: a drum magazine type and a belt-fed type with a belt extending from the magazine box under the backpack.

An axe-shaped close combat weapon, it uses a super-heated blade to cut through the armor of enemy MS or vehicles. When stored on the weapon latch on the waist, its grip can slide into a more compact form.

In September, U.C. 0079, at Side 7, Noa, following the launch of the RX-78-02 Gundam from the White Base, Dren was ordered by Char to equip Char and Slender's Zaku II units with Type 1 Gear and prepare to launch them along the laser lines. After Amuro's Gundam destroyed two missiles, Oscar Dublin detected Char's and Slender's Zaku II units, with the former approaching three times faster than the latter. Captain Paolo Cassius immediately and gravely recognized it as the Red Comet, Char, stating to a surprised Bright that it was the suit that single-handedly scrapped five of the Federation's battleships at Loum and ordered to turn back and run. Char's Zaku II, still moving at great speed was now close to the ship and Char saw the Gundam through his camera.

With Denim and Slender's Zakus

In front of a destroyed Salamis-class cruiser

Deploying from the Falmer

In front of the Falmer 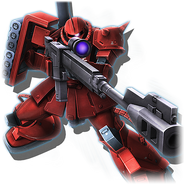 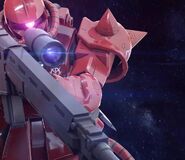 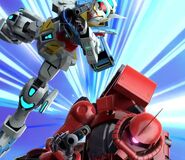