The MS-06R Zaku II High Mobility Type (Reuse "P" Device) (aka the Psycho Zaku) is a prototype mobile suit from Mobile Suit Gundam Thunderbolt and is piloted by Daryl Lorenz.

The MS-06R Zaku II High Mobility Type (Reuse "P" Device) is a mobile suit operated by the Zeon army's Living Dead Division. An experimental unit equipped with the “Reuse P (Psycho) Device” - a next generation operating system that has the potential to operate a mobile suit's limbs by communicating to the drive system of the mobile suit directly via thoughts. Even individuals with little piloting experience can master the controls in a short period due to this system. Although Ensign Daryl Lorenz is the pilot of the Psycho Zaku and his main mission is to snipe from ultra-long ranges, to pilot the unit, a high proficiency of control is necessary. It is believed that some training time is necessary, however it was pressed into combat so the training was cut extremely short thanks to the device. In order to draw out 100% of its abilities, the pilot must be quadruple amputee to fully interface with the mobile suit.

The 120mm machine gun is a standard weapon for Zaku type mobile suits. It is a shell firing gun that does not require energy to be used, however its effectiveness against heavy armor is very limited. Two of these weapons are stored under the lower propellant tank. While four spare drums are stored on the top rocket booster.

The 280mm Zaku Bazooka was another standard weapon that could be equipped to a Zaku type mobile suit. The bazooka fired explosive rounds that were quite effective against the armor of Earth Federation mobile suits and battleships. The MS-06R Zaku II High Mobility Type (Reuse "P" Device) carries one bazooka handheld & 4 spare magazines hooked to the top propellant tank.

A large bazooka originally designed for use by the Dom series of mobile suits. The 360mm bazooka is magazine fed and holds 10 rounds per magazine, and a single round is powerful enough to blow the torso off of an enemy mobile suit. Three of these are stored under the top rocket booster.

An axe-shaped close combat weapon, it uses a super-heated blade to cut through the armor of enemy MS or vehicles. The thermal energy is generated by the power output of the Zaku II's thermonuclear reactor and relayed through the MS' hands. The MS-06R Zaku II High Mobility Type (Reuse "P" Device) is armed with two such weapons.

A weapon originally developed for the Rick Dom. The bazooka has its own internal reactor, rather than an E-cap, and is, essentially, a Musai deck gun scaled down for mobile suit use. Due to using a reactor rather than an E-cap, the bazooka is capable of a single sustained blast or several short bursts, requiring a lengthy recharge period of approximately 10 minutes before it can be used again.

A next generation operating system that has the potential to operate a mobile suit like a pilot's arms and legs by communicating to the mobile suit's drive system directly via an electric signal transmitted from the pilot's brain. Even individuals with little piloting experience can master the controls of the Reuse P Device in a short period because on a base level, the pilot only need to thinks about movement. In order to use the system at full potential, all of the pilot's limbs must be amputated and replaced with special-made prosthetics.

Like the MS-06 Zaku II, two sub arms are mounted on the backpack. This is especially handy for the Reuse P type as it mounts a large arsenal of handheld weapons and spare magazines on its boosters' weapon racks.

The MS-06R Zaku High Mobility Type (Reuse "P" Device) can attach a maximum of one large rocket booster and two smaller boosters on its backpack to increase its thruster output, realizing high output and high mobility. They also serve as propellant tanks, with the smaller boosters also functioning as weapon racks. Can be ejected from the backpack when emptied.

In December UC 0079, Daryl quickly masters the Psycho Zaku’s control system and uses the suit to damage the Moore Brotherhood mothership Beehive, a modified Columbus-class, and destroy several Salamis cruisers. He also faces off against the FA-78 Full Armor Gundam piloted by his nemesis Io Fleming and narrowly beats him in an all-out battle. The Psycho Zaku is heavily damaged during the battle and set to self-destruct before its abandonment to protect its advanced technologies. However, the Newtype monk Levan Fuu secretly acquires the wrecked Psycho Zaku at the end of the war and transports it to his breakaway South Seas Alliance on Earth. His brainwashed forces begin repairing the Psycho Zaku and continuing research into the Reuse P Device under the supervision of J.J. Sexton. In UC 0080, this project attracts the attention of both the Earth Federation Forces and Zeon remnants. 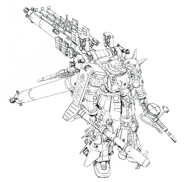 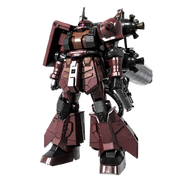 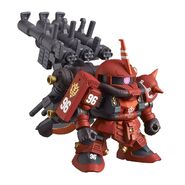