The MS-06R-AB Zaku Amazing is a mobile suit from the anime series Gundam Build Fighters. Based on the MS-06R-1A Zaku II High Mobility Type, the Gunpla is built and controlled by Tatsuya Yuuki.

The Zaku Amazing is a Gunpla built by Seiho Academy student council president Tatsuya Yuuki, who is also known as the "Crimson Comet". Tatsuya's building and piloting skills combine to create an unbeatable foe. The Zaku Amazing is based on the MS-06R-1A Zaku II High Mobility Type that appears in Mobile Suit Variation, and has been uparmored and equipped with new weaponry, with some of these modifications made from tank model parts. The unit's mix of ranged and melee weapons makes it a potent contender on any battleground, while its reactive armor helps to reduce damage taken by the unit. The Zaku Amazing's custom parts can separate from the base Zaku and combine with additional component into a support craft called the Amazing Booster, which is armed primarily with the long rifle and rocket launchers.[1]

The primary close combat weapon of the Zaku Amazing, a pair of them are stored in the sides of the backpack. As implied by their names, they rely on super-heated blade to cut through the armor of enemy units. They can be used to defend against Vulcan shots.

A pair of five-tube rocket launchers are mounted on the sides of the backpack. They can be fitted with various kinds of rockets, and are used for bombardment or to distract the enemies.

The Zaku Amazing is equipped with two revolver-like handguns that are stored in holsters mounted on the side armors. They can be loaded with various kinds of bullets but have a short firing range and limited ammo capacity of only six shots per gun.

A pair of shoulder shields serve as Zaku Amazing's primary defensive equipment. They can also be used for shoulder tackles.

The Zaku Amazing can be equipped with a long rifle which can be stored on the back of the waist. The rifle is about the height of the suit and is its most destructive weapon. It is created from parts of a tank model.

Used by the Zaku Amazing in Build Fighters Try, it is the same handheld bazooka as the MS-06 Zaku II. The weapon fires explosive rounds capable of dealing heavy damage.

A support craft with heavy armor and high mobility. It is formed from the combination of Zaku Amazing's lower leg armor parts, shoulder shields, rocket launchers, long rifle and handgun holsters with an external base component. As such, the combat capabilities of the Zaku Amazing itself decreased tremendously when the Amazing Booster is deployed. Thus, it is only deployed as a last resort, such as to allow Tatsuya to continue fighting even when the Zaku Amazing is destroyed.

The small black boxes on the legs and shoulder shields are reactive armor. They contain explosives and explode outward when hit, thereby cancelling out the attack and reducing the damage caused to the unit. The boxes are built from tank model parts.

For the history of the Zaku Amazing, please go to Tatsuya Yuuki's page. 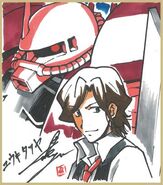 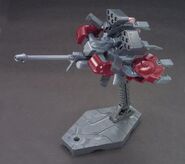