The MS-06R-3S High Mobility Type Zaku was a high performance MS created using one of the four MS-06R-2 Zaku II High Mobility Types and has mobility that can compete with the Federation's RX-78-2 Gundam. It was developed in a short period of time by using large number of parts from the Gelgoog. Significant increase in its generator output granted it sufficient power to use the Zeon forces' first beam rifle and beam saber, which are in prototype stage. However, this machine was equipped with a heat sword instead of a beam saber. It is considered the missing link between the Zaku and the Gelgoog, and is also known as the Gelgoog Early Prototype.

Mounted in the head, these shell firing weapons have a high rate of fire but little power and can't damage the armor of a mobile suit. However, they can damage lightly armored areas such as the sensors and are ideal for shooting down small, lightly armored targets such as missiles, attack vehicles, etc.

The High Mobility Type Zaku was one of the rare Zeon MS armed with a beam rifle at this stage of the war. The particle beam fired from a beam rifle can penetrate most armor not treated with specific counter-measures. 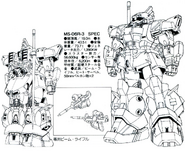 Back and Front Lineart 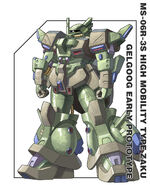 Retrieved from "https://gundam.fandom.com/wiki/MS-06R-3S_High_Mobility_Type_Zaku?oldid=462330"
Community content is available under CC-BY-SA unless otherwise noted.