The MS-06R-2 Zaku II High Mobility Type is a mass-production space combat mobile suit, and is another high mobility version of the MS-06 Zaku II. It was first featured in the original design series Mobile Suit Variations (MSV).

The Zaku II High Mobility Type was originally intended as a space use replacement for the old Zaku II, part of many MS development programs. Due to the cancellation of the MS-11 Action Zaku in favor of development of the MS-14 Gelgoog, the Principality of Zeon needed modern spaceborne MS as a temporary replacement. Zeonic company's bid was the MS-06R-2 Zaku II High Mobility Type. The R-2 Zaku was much lighter than its R-1A predecessor, featured increased storage for propellant, and had extra armor on the legs. However, the fact that the R-2 used the R-1A's reactor meant that it could not use beam weapons. Only four units were produced before the MS-09R Rick Dom was chosen as the new space combat MS.

The 120mm machine gun is a standard non-beam weapon for Zaku type mobile suits. It is a shell firing gun that does not require energy to be used, however its effectiveness against heavy armor is very limited. The ZMP-50D used a 100-round drum magazine.

A large bazooka originally designed for use by the Dom series of mobile suits. The 360mm bazooka is magazine fed and holds 10 rounds per magazine, and a single round is powerful enough to blow the torso off of an enemy mobile suit. The bazooka could be stored on the rear waist armor when not in use.

The four units were assigned to Major Johnny Ridden (painted red and black), Lieutenant Colonel Gabby Hazard (painted orange and black), Colonel Robert Gilliam (painted blue and beige) and the fourth unit was given to test pilot Elliot Rem, which eventually evolved into the MS-06R-3S High Mobility Type Zaku. In the Spirits of Zeon video game, the fourth unit is assigned to Kurt Roswell (painted maroon and gray). 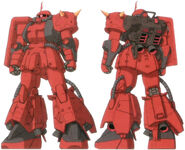 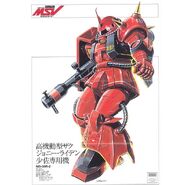 Retrieved from "https://gundam.fandom.com/wiki/MS-06R-2_Zaku_II_High_Mobility_Type?oldid=277339"
Community content is available under CC-BY-SA unless otherwise noted.