The MS-06R-2S Zaku Late Production Type Dozle Zabi Custom was originally created by Hitoshi Fukuchi for the Fukuchi Mobile Suit Station (FMS) feature in Bandai's Bandai Model Journal 120 (July 1989). Fukuchi is the same artist who created the variants featured in the Gundam 0080 and Char's Counterattack model kit manuals, and most of his FMS creations are variants of One Year War mobile suits.

A special variant of the MS-06R-2 Zaku II High Mobility Type swathed in glossy black, the Zaku Late Production Type Dozle Zabi Custom was designed and developed by Fritz Guderian as Dozle Zabi's personal custom machine, the intended role of this powerful machine was anti-ship combat and to devastate the Earth Federation Force's space fleets. Because of the addition of heavier armor (mainly on the chest and shoulder areas), and several weapons including a pair of chest-mounted mega particle cannons, this mobile suit was significantly larger than the standard Zaku II High Mobility Type. Since it's generator output was not sufficient enough to power its mega particle guns, this model had to be connected (via backpack) with a modified R-2S model, termed "Energy Backup Use Escort Unit".

The Zaku Late Production Type Dozle Zabi Custom was still in its development phase when the Earth Federation launched it's Operation Star One campaign on Solomon earlier than the Zeon high command had anticipated. It is unclear whether Dozle Zabi actually piloted this mobile suit or not, but after his death in the battle of Solomon, the data for the MS-06R-2S was recovered by a Gwazine-class. 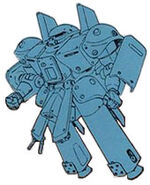 Retrieved from "https://gundam.fandom.com/wiki/MS-06R-2S_Zaku_Late_Production_Type_Dozle_Zabi_Custom?oldid=491232"
Community content is available under CC-BY-SA unless otherwise noted.