When the RX-78-2 Gundam with its hand-held beam weapons appears, Zeon engineers were forced to redesign the mobile suit. The MS-11 project was scrapped and Zeonic Company started on a new mobile suit called MS-14 Gelgoog. The plans for the MS-11 Action Zaku was later assigned to the Pezun Asteroid Base. 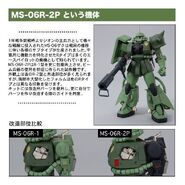 Retrieved from "https://gundam.fandom.com/wiki/MS-06R-2P_Zaku_II_High_Mobility_Test_Type?oldid=454717"
Community content is available under CC-BY-SA unless otherwise noted.