The MS-06R-1A Zaku II High Mobility Type is a mobile suit featured in Mobile Suit Gundam: The Origin. The Principality of Zeon's Black Tri-Stars used them during the One Year War.

When the mass production system of the highly versatile C Type was refined in anticipation of the war of independence, the Principality forces began developing MS-06 Zaku II types adapted for local warfare, which were specialized for particular combat situations. The first of these to be completed was the MS-06R-1A Zaku II High Mobility Type. In this machine, versatility was abandoned, and improvements were made to increase its mobility for combat in outer space. Its large backpack was fitted with an extra propellant tank, which could hold a greater supply of quickly consumed propellant. Three large acceleration thrusters were added to each leg to further boost its mobility.[1]

A defensive equipment made of steel and multiple types of shock absorption material. It is fitted with weapon latches, which can be used to hold two spare magazines for the bazooka. Gaia's unit mounts two shields to carry more bazooka magazines.

A sniper rifle mainly used for anti-ship combat. It discharges specialized rounds at a high initial velocity, which can split into submunitions after penetrating a warship's armor, destroying it from within. It is especially devastating when used against the bridge or engine of a ship.

A close combat weapon used by Ortega's unit, it is used in coordinated attacks with the other machines of the Black Tri-Star. The Giant Heat Hawk's total length is four times that of the normal heat hawk, with its blade being over 10m in size. When its heated blade is combined with the kinetic energy used to swing the weapon, a terrifying destructive power can be produced. Hidden thrusters in the weapon's head can be deployed to enhance the attack power. However, due to its non-standard size, the Giant Heat Hawk is difficult to wield.

A rocket launcher weapon carried by mobile suits and equipped with three rockets. It exhibited its destructive power mainly in anti-ship combat.

The personalized mobile suits of the Black Tri-Stars used during the Loum campaign in the opening weeks of the One Year War. The Tri-Stars would not only use these suits to lead the Zeon MS forces into battle in the Loum but also cripple the "Ananke" a Magellan-class that served as the flagship for the Federation forces at the Loum, and also capture Johann Ibrahim Revil as he attempted to flee his downed ship.

Being adjusted at the Zeonic facility in Granada 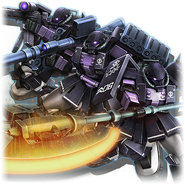