The MS-06M Zaku Marine Type (aka Marine Hizack) is a submarine combat variant of the MS-06F Zaku II, it was first featured in the original design series Mobile Suit Variations (MSV).

As the One Year War dragged on the Zeon began to design several different variations of its standard mobile suits to excel in specific mission roles. The Zeonic Company created the first amphibious mobile suit, the MS-06M-1 Zaku Marine Type (also called Zaku Mariner), based on the MS-06F Zaku II.

The body was identical, except all of the joints were equipped with waterproof seals, and it mounted hydrojet engines on its backpack, arms, and legs as opposed to standard chemical rocket thrusters. The Zaku Marine Type also carried weaponry better adapted for aquatic combat, such as a SUBROC (SUBmarine ROCket) Gun, two 4-tube 240mm rocket pods, and twin vulcans mounted in the head.

The Zaku Marine Type sports two vulcan guns mounted in the head. These low-caliber weapons are typically used to shoot down lightly-armored targets and missiles.

Early in development only five MS-06M-1 Zaku Marine Types were constructed at Side 3 before being sent to operational units after the third descent operation. The units were given to the Sea Serpent submarine squadron for field testing off the Pacific Coast of North America. This test proved to be a failure, as the waterproof seals on the joints were prone to cause problems, and the Zaku body was deemed far too un-streamlined, which severely reduced mobility under the sea. Unsatisfied with the design, the Zeon began to produce all new marine mobile suits, and the five Zaku Marine Types were re-assigned to serve as data-gathering units.

Two more Zaku Marine Types would later be constructed, now under the model number MSM-01. The seven units would be distributed to several of Zeon's submarine squads such as the Sea Serpent, Red Dolphin, Naga III, Green Siren, and Manta Ray squadrons.[citation needed] 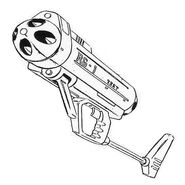 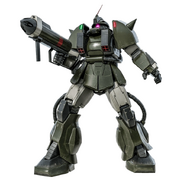