Developed mainly for work purposes, its only equipment was a set of four manipulator arms which were used for precise and dedicated work. It also featured a two-seater, manipulator operator chest (left breast, but in the illustration, the description is written in the chest and right) fitted with an overhanging operator box with a window in the driver's seat, used for working visually. Only a few units were produced and were used in the Solar Ray's construction. 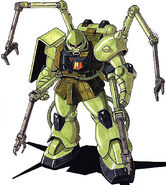 Retrieved from "https://gundam.fandom.com/wiki/MS-06MP_Manipulation_System_Type_Zaku_II?oldid=441526"
Community content is available under CC-BY-SA unless otherwise noted.