The Zaku Cannon (Gatling Gun Equipment Type) is a MS-06K Zaku Cannon that has been outfitted with a 120mm gatling gun, replacing the 180mm cannon.

The gatling gun is a medium-range weapon mounted on the Zaku for anti-air and anti-ground attacks.

Also known as "Big Gun", the Zaku Cannon (Gatling Gun Equipment Type) deployed by the 7th Military Academy in Gundam Build Divers episode 7 is equipped with this weapon mounted on the bottom left of the backpack. It is magazine-fed and can fire small-caliber rockets rapidly. 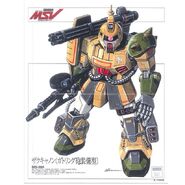