The MS-06K Zaku Cannon is one of many variants of the MS-06 Zaku II produced by the Principality of Zeon. Debuting in the original design series Mobile Suit Variations, its design was later updated for the novel/OVA series Mobile Suit Gundam Unicorn.

The Zaku Cannon was developed out of the Zeon's MS-06J-12 Project, which was to build an anti-aircraft mobile suit. The project was change to include mid-range support capabilities following the appearance of the Earth Federation Forces' mid-range fire support RX-77-2 Guncannon. The Zaku Cannon was based on the MS-06J Zaku II Ground Type and has a powerful 180mm cannon mounted on the backpack.

Its K-type backpack can be replaced with a Zaku II Ground Type's backpack when needed. The Zaku Cannon featured a 360 degree camera eye for improved vision and target acquisition, and had more powerful thrusters in its legs to overcome its increased mass. However, the Zaku Cannon suffered from poor balance due to the 180mm cannon's recoil and as a result, only a limited number of units were produced.

Mounted on the backpack, it is the main weapon of the mobile suit. Its overall power is equal to that of the Guntank with a single shot being able to destroy a mobile suit. Unfortunately that same power also forces the Zaku Cannon off balance due to massive recoil.

Also known as Big Guns, the pair of 2-tube Rocket Launchers are mounted on the lower sides of the backpack. The launchers are magazine-fed and can fire small-caliber rockets rapidly.

An optional backpack equipment created by the Zeon for use by their Mobile Suits for air drop missions, the parachute pack contains a large parachute and aided by four thrusters in making a safe landing to the ground, once touchdown had been accomplished the backpack would be ejected as to not hinder the Mobile Suits performance in ground combat.

Nine prototype units were constructed at California Base, and this squadron of Zaku Cannons were led by Ian Graden in defense of the base until the end of the war. Greydon's own Zaku Cannon sports a custom twin-antenna head that came to be known as the "rabbit type." A handful of other Zaku Cannon units also appeared in other theaters on Earth, including Southeast Asia and Australia.

After the One Year War, the Earth Federation picked up the designs and produced the machine to supplement their forces. In the assault of Torrington Base in U.C. 0096, the Zeon remnants deployed at least one Zaku Cannon.

As seen on Mobile Suit Gundam: The 08th MS Team

Zaku Cannon (bottom center) as seen on Gundam: After Jaburo 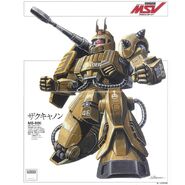 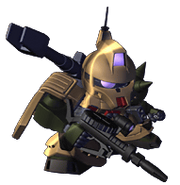 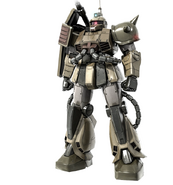 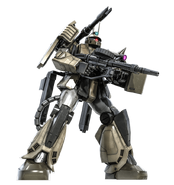 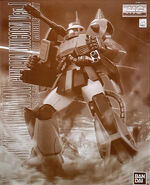 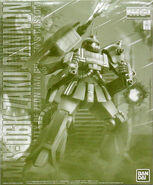 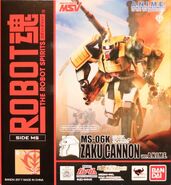