The MS-06J Zaku II Ground Type is one of several variants of the MS-06 Zaku II line of Mobile Suits.

A modified version of the MS-06F Zaku II designed for ground combat, the J-type superficially resembled the F-type, but had many internal differences. It removed any space-use equipment that would have become dead weight under gravity, reduced the oxidizer in the propellant, and adopted an air cooling system, leading to a completely different basic structure around its reactor.[1] Due to the removal of unnecessary equipment, it was lighter compared to the F-type, leading to less power loss under gravity.[2]

To account for atmospheric distortion, the light receptor semiconductor unit and measurement software of its monoeye were both updated from the ones used by the F-type, and it featured a more accurate infrared sensor. Its manipulators were coated with soft material for improved sealing, with a new software installed to account for the constant 1 g gravity.[1]

The F-type's AMBAC system was omitted, and the space used for leg sub-thrusters were used to mount newly designed anti-ground sensors. A pair of hardpoints that also serve as I/O ports were added to its legs. However, the sub-thrusters at the bottom of its feet were untouched, as they could improve mobility when used in conjunction with the main thrusters. This would eventually inspire the thermonuclear jet hover drive used by the MS-09B Dom.[1]

The J-type mostly used the same weapons as the F-type. However, due to recoil being less problematic under gravity, it was able to equip various optional equipment, including leg-mounted missile pods, the Magella Top cannon, and cracker grenades.[2]

A new heavy bazooka which features powerful rocket-propelled rounds, and improved targeting sensor with protective cover for aiming. The bazooka is magazine-fed and can hold 5 rounds per magazine.

A throwing weapon seen used by a J-type Zaku of the Semovente Corps.

An optional 3-tube missile launcher can be attached to the left forearm of Zaku II. It is similar to the model used by the MS-06D Zaku Desert Type and MS-14C Gelgoog Cannon.

A handheld firearm captured from the Federation's ground forces. Equipped with a box magazine and folding stock, it has excellent rate of fire and is easy to wield. It utilized a smoothbore type barrel that lacked rifling and has to be replaced after firing 3000 rounds. The weapon could utilize three different types of ammunitions: HEAT (High Explosive Anti Tank), APFSDS (Armor-Piercing Fin-Stabilized Discarding-Sabot), and HESH (High Explosive Squash Head).

The MS-06J rolled out in late September, U.C. 0078, at Zeonic's Mahal factory, around the same time as the F-type's rollout. By the time the Principality of Zeon announced national mobilization in October of the same year, around 80 units of MS-06J had already been produced.[1] However, full production of the J-type only began after Zeon launched its invasion of Earth in February, U.C. 0079.[3] It was mostly produced from Granada and, following its capture, the California Base.[2]

The J-type was used by Ramba Ral's unit to attack the White Base on 3 November, as revenge for the death of Garma Zabi.[3]

On 9 December, following Zeon's defeat during Operation Odessa, a portion of the retreating Zeon forces launched into space in a large number of HLVs. Seeing an opportunity, the Federation Forces at Luna II deployed RB-79 Balls to hunt down the defenseless HLVs. Multiple J-type Zakus exited their HLVs and attempted to fight back. However, since they lacked AMBAC systems, they were unable to maneuver effectively in space, causing many of them to be destroyed by the Balls.[5]

Following Zeon's retreat from Earth, parts for the MS-06J were reused in the production of the MP-02A Oggo mobile pod.[6]

A Zaku II Ground Type that has had cold protection treatment applied to its drive sections, spikes added to the bottom of the feet, and a sensor added to the left side of the head along with being painted white. 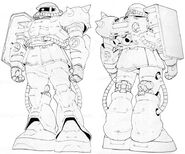 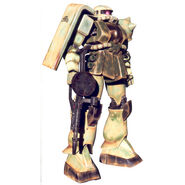 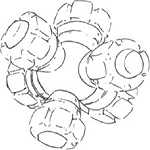 S-Mines detonating in mid-air, showering the ground with shrapnels

An M72 Lakota shredded by shrapnels from the S-Mines 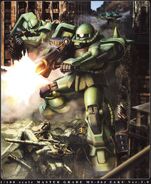 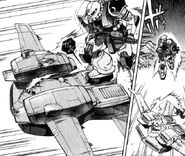 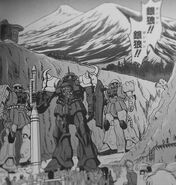 Design and specifications (MS IGLOO: The Hidden One Year War)