The MS-06JK Zaku Half Cannon is a variant mobile suit of the MS-06K Zaku Cannon. It was first featured in the MSV-R design series.

Also known as Big Gun, the 2-tube Rocket Launcher is mounted on the left side of the Zaku Half Cannon's backpack. It is magazine-fed and can fire small-caliber rockets rapidly.

The gatling gun is a medium-range weapon mounted on the Zaku Half Cannon's backpack for anti-air and anti-ground attacks. Can be switched with the 180mm Cannon.

Mounted on the Zaku Half Cannon's backpack, this cannon is able to destroy a mobile suit in one shot. Can be switched with the 120mm Gatling Gun.

Exclusive to Mia Brinkman's unit. The Noisy Fairy Squadron received this system from the Midnight Fenrir Corps, and installed it into the legs of Mia's Zaku Half Cannon. Although considered outdated technology by the time of the One Year War, the underground sonar was generally less affected by Minovsky Particle interference compared to radar. It proved an invaluable tool when it came to detecting moving ground targets during nighttime operations, in environments with low visibility, and in environments with high Minovsky Particle density. 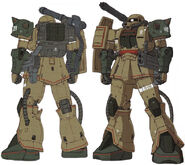 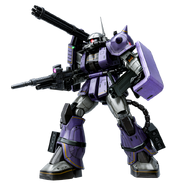