This machine is a modified version of the Zaku Type G that was acquired by Deen West through Black Market channels after the One Year War. It is painted in red and ivory colors, and is equipped with a blade antenna on the head. Dean's machine was also equipped with a generator developed near the end of the One Year War, and it was able to operate weapons that the Zaku couldn't originally mount. This gives it the potential to withstand a variety of modifications, such as equipping the arms of the Gouf Custom, the backpack of the Zaku Half Cannon, the lower body of the Zaku Tank, and even the legs and backpack of the High Mobility Type Zaku II for operation in space.

Mounted on the right shoulder, it is a simple defense used to block most physical projectiles. However, unlike the standard shoulder shield, which folds onto the top of the shoulder, the MS-06G's shield is angled off to help improve its defense.

A close-range weapon from the MS-07B Gouf. This retractable cable delivers a high-voltage electrical shock when it comes into contact with an enemy mobile suit, damaging its internal systems and stunning its pilot. The heat rod could also be superheated to give it cutting properties.

A melee weapon originally developed for the Gouf. Like the Zaku's heat tomahawk, the heat sword's blade is heated to high temperatures to increase its cutting capacity.

Mounted over the right shoulder, this artillery cannon is for medium-to-long range fire support. This weapon is diverted from the MS-06K Zaku Cannon.

Also known as "Big Guns", these launchers are mounted on the lower sides of the backpack. The launchers are magazine-fed and can fire small-caliber rockets rapidly. This weapon was also used by the Zaku Cannon.

A weapon from the Gouf Custom, it is a shield with a powerful, drum-and-belt fed, 75mm Gatling Gun attached to it. The Gatling Gun can be detached from the shield when it runs out of ammunition.

A rocket booster for auxiliary propulsion attached to each side of the MS-06G's backpack. It is used for high-altitude jumps under gravity. This is same equipment as used by the MS-06F2 Zaku II F2 Type. 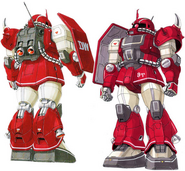