The MS-06G Zaku II High Mobility Ground Type (A.K.A Zaku Type G) is one of many variants of the standard MS-06 Zaku II created by the Principality of Zeon during the One Year War. It was first mentioned in Mobile Suit Variations but never had official lineart until the release of MSV-R.

The MS-06G Zaku II High Mobility Ground Type was a successor to the MS-06J Zaku II Ground Type that was built in limited numbers before the introduction of the MS-07B Gouf. What made this particular type of Zaku stand out from other models is the additional boosters that grant the machine improved mobility. Its improvement was so great that it was argued that the G-Type Zaku was one of the highest performing ground combat mobile suits deployed during the One Year War.

Mounted on the right shoulder, it is a simple defense used to block most physical projectiles. However, unlike the standard shoulder shield, which folds onto the top of the shoulder, the High Mobility Ground Type's shield is angled off of it to help improve it's defense angle.

The main gun of the HT-01B Magella Attack main battle tank, it was then remodeled as an MS artillery weapon. The Top Cannon was mainly used for long distance ground combat and can be loaded with HEAT or APFSDS rounds. It's capable of destroying mobile suits in a single hit, and can also inflict heavy damage to warships.

As the Zeonic Company developed the MS-07 Gouf ground combat mobile suit, they realized that one of its most useful features was the incorporation of thrusters in the legs to allow the unit to perform jet-assisted jumps. This new advance would be taken and applied to the old line of Zaku II Ground Type mobile suits. The retrofitted MS-06J Zaku II Ground Types which featured the additional leg thrusters and extra armor were referred to as Zaku II High Mobility Ground Type (or G-Types for short), and proved to be much more mobile than a standard Zaku II Ground Type. They can be mounted on Dodai GA bomber craft for limited aerial combat.

In 0079 U.C, Lieutenant Gunter Hal piloted a Zaku II High Mobility Ground Type attached with a commander antenna in the African Front. He was feared by the Earth Federation troops and earned the nickname "Hawk of Hogle" when he destroyed 9 Federation fighters in an aerial battle situated above Hogle Mountain in the Sahara Desert. Lieutenant Gunter Hal, sortied a total of 23 times on the African Front, tallying up an impressive score of 32 fighters, 6 bombers and one RGM-79. Around the middle of December, Gunter was transferred to A Baoa Qu with him only spending 42 days on the African Front. Another unit was also piloted by Vincent Gleissner of Zeon's regiment the Marchosias and painted in his custom colors.

A custom unit procured from the black market and then upgraded by Deen West. It has additional boosters for better speed and maneuverability. 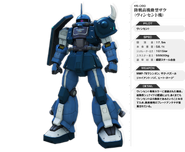 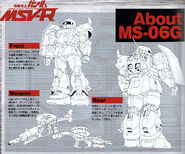 Retrieved from "https://gundam.fandom.com/wiki/MS-06G_Zaku_II_High_Mobility_Ground_Type?oldid=462306"
Community content is available under CC-BY-SA unless otherwise noted.