The Zaku Minelayer is not a new mobile suit per se, but actually just a standard MS-06F Zaku II equipped with a different style backpack.

With this new backpack, the Zaku II is adapted to play the role of a mine-laying unit. The new backpack houses several drums filled with space mines, with twelve mines packed into every drum. The backpack also has a few additional maneuvering thrusters and carries five times the amount of fuel of a standard Zaku II. However, the Zaku Minelayer requires a special loading area on a Musai to reload, launch, or land.

The standard Zaku II backpack has been replaced by a model specialized for the purpose of laying space mines. The drums are used to rapidly place mines over a wide area, a task which if done manually is both time-consuming and dangerous. Furthermore, the new backpack improves the Zaku II maneuverability and operational time by additional thrusters and fuel.

Space mines work in the same principle as the older naval mines: They are self-contained explosive device placed in space to damage or destroy spaceships passing through. There are 12 mines in each drum the Zaku Minelayer carries. 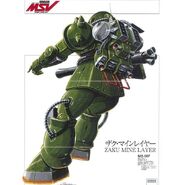 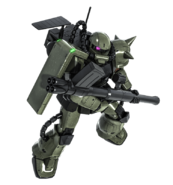