A bazooka originally developed for anti-ship use. It fired explosive rounds that were quite effective against the armor of Earth Federation battleships and MS. Can be stored on the rear waist armor when not in use. 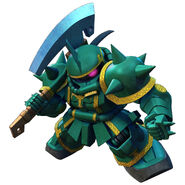 Retrieved from "https://gundam.fandom.com/wiki/MS-06F_Zaku_II_Dozle_Zabi_Custom?oldid=454622"
Community content is available under CC-BY-SA unless otherwise noted.