MS-06F Zaku II [Stutzer] is a custom variant of the standard MS-06F Zaku II created by Zeon remnants. It first appeared in the photonovel Advance of Zeta: The Flag of Titans.

After the One Year War, the remnants of the Zeon forces upgraded their Zaku II units to this MS-06F Zaku II [Stutzer] configuration to counter the Titans' new machines, as Zeon no longer had any production capabilities for any new mobile suit designs. The Zaku II [Stutzer] was enhanced with winch units, which were able to launch wire-guided arm parts that could entangle enemy machines with wire, or throw hand grenades at them while the mobile suit itself remained hidden. Additionally, the Stutzer mounted the MS-14A Gelgoog's beam rifle, which was powered by an auxiliary generator on its back. 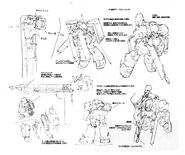 Retrieved from "https://gundam.fandom.com/wiki/MS-06F_Zaku_II_%EF%BC%BBStutzer%EF%BC%BD?oldid=440366"
Community content is available under CC-BY-SA unless otherwise noted.