The MS-06FS Zaku II (aka Zaku II FS, Zaku II Type FS) is one of many variants of the MS-06F Zaku II created by the Principality of Zeon during the One Year War. One of these was the personal unit of Garma Zabi.

A minor change version of the Zaku II F-Type, the Zaku II FS is a high-end model with enhanced close combat capabilities and added vulcan guns on its head. In addition, its communication functions have been enhanced with a blade antenna as standard equipment. Like the Zaku II S-Type that was introduced later, the Zaku II FS has high operability in space and on earth. The Zaku II FS is manufactured on the same production line as the Zaku II F-Type, and in many cases, a well-made F-type was selected as the base machine. It is produced in extremely small numbers, and mainly assigned to pilots in high position such as Garma Zabi, commanders (before the introduction of Zaku II S-Type), as well as to mobile suit teams that focused on close combat.[1][2] Besides being used for combat, the Zaku II FS was also used in ceremonies.

The Zaku II FS has four Vulcan guns in its head, two on each side, which is rare for the Zaku series. These shell-firing armament are used for restricting enemy's movements, creating a barrage, intercepting missiles, etc. However, due to limited storage space for the ammunitions, these vulcan guns can only fire continuously for about 10 seconds. Eric Manthfield's Zaku II FS retained only the top two guns, with the bottom two guns sealed off to increase ammunition capacity. Depending on sources, the caliber of the Vulcan guns are said to be 30mm or 40mm.

A throwing weapon that can be set to detonate upon impact with the target or timed to explode after a preset time. They come in multiple variants, allowing them to perform different roles in battle.

The same defensive armament as used by the MS-07B Gouf. Its main purpose is to defend in close combat rather than at long range.

A heat weapon for close combat. The blade is larger than that of the standard model used by the Zaku II. Garma Zabi's machine equipped a custom model. During the events of MSV-R: The Fabulous Shin Matsunaga, Shin Matsunaga's unit is equipped with the same model as used by Dozle Zabi's customized Zaku II.

A rocket booster for auxiliary propulsion attached to each side of the backpack, and is used for high-altitude jumps under gravity. This is the same equipment as used by the MS-06F2 Zaku II F2 Type.

When Garma Zabi was assigned to Earth, he brought his customized Zaku II FS-Type with him, however he rarely sortied with it after being assigned to a leadership role. Ace pilots Gabby Hazard, Eric Manthfield and Shin Matsunaga also piloted these machines. Garma's unit was eventually piloted by Zeon's agent Tara I. Cicero during the events in Mobile Suit Gundam: We're Federation Hooligans!!. It was last seen being exhibited in New York for the 10th Anniversary of Liberation in U.C. 0090. 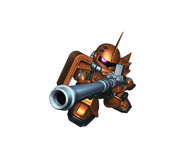 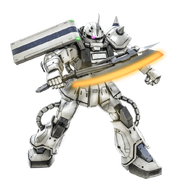 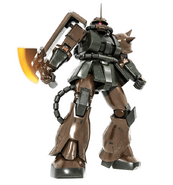 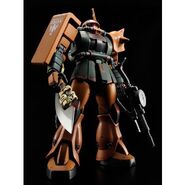 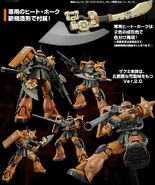