The F2 Type was the late production variant of the MS-06F Zaku II. Based on the operation data of its predecessor, the F2's design concept was to revise the Zaku II for anti-mobile suit combat - something that was not accounted for in mobile suit design until the MS-07B Gouf - by reducing its weight and increasing its thruster output. In addition, since the F Type's armor around the cockpit hatch was fragile, the F2 Type featured a redesigned chest armor, which became its most distinctive feature compared to other models of the same series.[1]

Since a portion of the F2 Type was produced after the implementation of the United Maintenance Plan, these units share the same unified cockpit design as well as some parts as other second phase production type mobile suits.[1] These units were easier to pilot than existing mobile suits, and were popular among new recruits and cadets.[2]

An alternative to the MMP-78, it is an upgrade of the above weapon. It used 90mm bullets instead of 120mm type, allowing for a greater firing speed and better penetration capabilities. The machine gun is magazine-fed with 32 rounds per mag.

The primary weapon of the MS-09R-2 Rick Dom II, it is a redesigned version of the 360mm Giant Bazooka, with improved shape charges and firepower. It is fed by a 5 rounds magazine-fed and a single round is effective in anti-ship and anti-mobile suit warfare. During Operation Stardust in U.C. 0083, some units of Delaz Fleet's Zaku F2 Types were equipped with Giant Bazooka II for ranged attacks.

A experimental beam weapon developed at Axis after the One Year War, its effective firing range is 1.8 times that of a ordinary beam rifle. As it's powered by its own built-in generator, it can be wielded by Zaku type MS. The generator however only has enough power for five shots. The firearm appears in Mobile Suit Gundam: Char's Deleted Affair: Portrait Of Young Comet.

A weapon borrowed from the MS-05L Zaku I Sniper Type. However the F2's accuracy with the weapon is poor as its sensors aren't designed for sniping. During the events in Mobile Suit Gundam 0083 Rebellion, Earth Federations' Zaku F2 Types were equipped with the Beam Sniper Rifle for rookie pilots' target practice.

An axe-shaped close combat weapon, it uses a super-heated blade to cut through the armor of enemy MS or vehicles. The thermal energy is generated by the power output of the Zaku II F2's thermonuclear reactor and relayed through the MS' hands.

A basic defense armament obtained from the RGM-79C GM Type C, it is an improved model of the RGM-M-Sh-003. It has the exact same size as its predecessor, but its material was changed to Titanium-Ceramic composite. Its mount latch was made movable, allowing the shield to be positioned up or down when carried by a Mobile Suit manipulator or mounted on the forearm, increasing its usability. During the events in Mobile Suit Gundam 0083 Rebellion, the Zaku F2 Type piloted by Chuck Keith is equipped with this shield. In U.C. 0086, Asuna Elmarit would also equip this shield on the Zaku F2 Type she piloted while apart of Marie Albertia's pirate group.

A defense armament obtained from the AMS-119 Geara Doga, this physical shield mounts on the left forearm and contains carrying clips for Sturm Fausts. Appears on a customized Gunpla used by a 7th Military Academy member in Gundam Build Divers.

As the Zaku F2 type's reactor was insufficient to power the beam sniper rifle, it could be outfitted with a 700 kW external auxiliary reactor.

At the time of the F2 Type's creation, the development of new models was proceeding at a rapid pace, and it became difficult to secure a production line, so the F2 Type was produced at multiple locations.[1] However, its deployment did not go as planned: Due to the top-down structure of the Zeon military, as well as supply routes being cut off, they were only deployed to small number of locations, such as the Solomon sector after it fell to the Federation, and the African Front.[3]

Because of this, a large number of these units existed as undelivered inventory, and many were used by Zeon Remnants following the end of the One Year War.[3] Due to their ease of piloting, many units were also acquired and used by the Federation as training units or aggressors after the war.[2] The F2 Type, including units used by the Federation, was involved in almost every battle during the Delaz Conflict that occurred in U.C.0083.[3]

In the manga Mobile Suit Gundam 0083 Rebellion, one of the Zaku F2 units used by the Kimberlite Forces was modified with a pair of legs taken from the Dom Tropen, affording it greatly increased mobility.

Emerging from an explosion

Unit used by the Kimberlite Forces

Bitter's unit charging at the Albion

In hangar with Rick Dom II 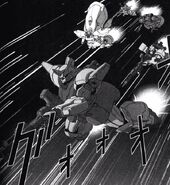 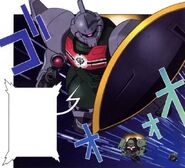 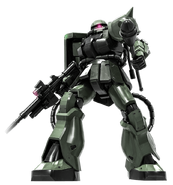 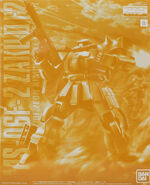 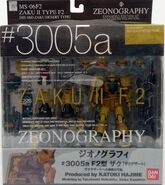 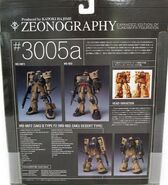 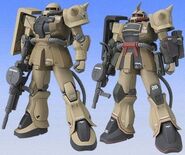 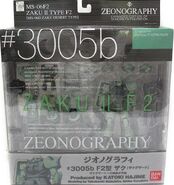 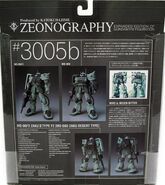 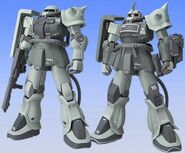