The MS-06E Zaku Reconnaissance Type (aka Zaku Recon Type) is a mass-produced reconnaissance mobile suit designed for scouting and spying operations. The unit is featured in the original design series Mobile Suit Variations.

These Zaku Recon Types, also known as E-Types, mounted specialized cameras and sensor systems. The Zaku II's original mono-eye was replaced with a higher powered, longer ranged mono-eye that actually jutted out from the head. On the shoulders and front pelvic skirt armor were other sensors and cameras. The E-Type also incorporated powerful thrusters in the chest for fast retreats. Along with the upgraded thrusters, it had more propellant storage capacity for long-range missions and a longer operational time. The Zaku Recon Type was usually unarmed, but held in its hands a small "camera gun" for recording its findings. Despite being a detection suit, it could be equipped with standard Zaku armaments such as the 120mm machine gun.

Shields are simple in their design, being essentially thick slabs of metal that can be used to absorb the impact from attacks that, for whatever reason, cannot be dodged. The Zaku Reconnaissance Type uses a shield similar to the one used by the RMS-106 Hizack.

The Zaku Reconnaisance Type typically carries a Camera Gun, which is essentially a compact, one-handed camcorder.

A reconnaissance mobile suit based on the Zaku II. During Minovsky particle dispersion, vision-based combat has become the norm, and reconnaissance had become more important than it was in the past, Which is why its development was based on the Type C and the mass production version was based on the Type F. Since its missions required it to enter dangerous areas to retrieve and return with accurate and clear information, it was equipped with a backpack which was improved upon the Type S gear. Small thrusters and rockets for emergency evacuation were added to its body parts, and propellant were also added to prolong operation time. Overall, its mobility has been optimized and enhanced for the missions. As for the recon equipment, the mono-eye sensor was replaced with a highly complex, enhanced communication device. Optical cameras are added to the unit's body parts, and it is equipped with a special Camera Gun. As a recon type it is often mistaken for lacking combat ability; however, its goal is to avoid combat but still have enough weaponry and combat capability to break through enemy lines.

The MS-06E Zaku Reconnaissance Type was a good success for the Zeon Military Force. They were able to provide information from behind enemy lines and give the Zeonic forces good intel. Roughly 100 units were produced. Many of the Zaku II E-Types survived the One Year War and were later used by the Earth Federal Forces and the Titan taskforce. The RMS-119 EWAC Zack "Eye-Zack" could be considered a distant relative of the MS-06E Zaku Reconnaissance Type. 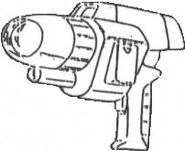 Zaku Reconnaisance Type from Advance of Zeta: The Flag of Titans 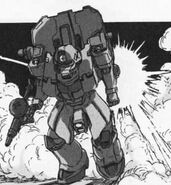 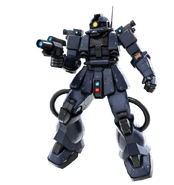 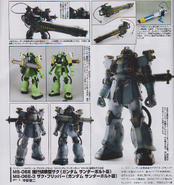