Sharing the same model number and a similar name the MS-06D Desert Zaku serves as an improved version of the MS-06D Zaku Desert Type. Featuring much of the same technology the Desert Zaku has been improved by redesigning the joints to include more sand filters and armor to block the sand of the desert. This equipment allows the Desert Zaku to be buried in the sand without the worry of sand clogging its equipment, thus allowing the unit to lie in wait for enemy forces and ambush them. The unit also features better power output, external propellant tanks on its backpack to carry extra thruster fuel, and additional shields for defense.

To improve mobility the Desert Zaku a pair of jet skis can be mounted on the units feet that allow the Desert Zaku to propel itself over the sand in a manner similar to a skier on snow.

A handheld weapon seen only on the Desert Zaku, it fires rocket-propelled explosives at its target and can hold up to eight rounds in its magazine. When not in use, the rocket launcher can be stored on the shoulder shield.

A machine gun developed for the Zaku Desert Type. Changes from the M-120A1 model include shortened barrel and stock, and omission of the scope. Its handling properties are improved through the reduction in weight.

A small missile launcher attached to the left forearm.

Basically a mobile suit sized hand grenade. Up to two of them can be stored in a compartment on its hip armor.

The same Beam Rifle used by the MS-14A Gelgoog. It is used by the Desert Zaku of the African Liberation Front's Blue Team in U.C. 0088.

Attached to the unit's back are a set of propellant tanks intended to give the mobile suit longer use of its thrusters.

To increase its mobility on land, the Desert Zaku can be equipped with a pair of Jet Ski's on its feet. When in use, they give the Zaku mobility on par with the Dom series. Each jet ski has its own propellant tank and a set of thrusters.

During U.C. 0088 a number of Desert Zakus would be deployed in North Africa by Zeon remnants led by Desert Rommel, these units would engage in guerrilla activity against the Earth Federation army in Africa, all the while stealing weapons and materials from nearby federal military bases. A few Desert Zakus would also land in the hands of the African Liberation Front rebel group, with one unit operating as part of their Blue Team and painted in their distinctive light-blue-on-blue colors. In U.C. 0096, at least one of these suits was used by Zeon remnants to attack the Federation's Torrington Base in combination with a MS-09F/trop Dom Tropen and a MS-09G Dwadge. Its group would later be destroyed by the regrouping Federation Forces during the Federation counterattack. 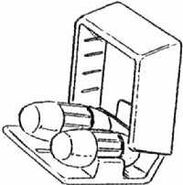