The MS-06DRC Desert Zaku Rommel Custom is a custom variant mobile suit of the MS-06D Desert Zaku and personal machine of Desert Rommel, ace pilot and captain in the old Principality of Zeon army. It appears in the ZZ-MSV.

Basically the same as the MS-06D Desert Zaku, the MS-06DRC Desert Zaku Rommel Custom includes unique features, including a custom head design, a custom spiked shoulder armor design, and a claw shield on its right shoulder.

Instead of the typical Zaku machine gun, the Desert Zaku Desert Rommel Custom has an unique long-range rifle as its main armament. As its name suggest, the rifle is both more accurate and powerful than the standard issue machine gun.

The Desert Zaku Desert Rommel Custom wears on its right arm an elongated model of the Zaku's shield, with two prongs extended out. While capable of deflecting most incoming ballistic projectiles and some explosive warheads, the prongs make the shield into a weapon for slashing and punching.

Desert Rommel would use this custom unit during the First Neo Zeon War. He would later upgrade to the MS-09H Dwadge Custom. 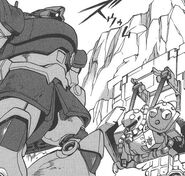