A redesign of the MS-06A, the MS-06C was fitted with spiked armor on its left shoulder and a shield on its right. It was also equipped with a heat hawk for melee combat.[1] In order to protect the pilot from the radiation from the nuclear warheads it fires, it utilized triple-layer composite armor, and the gaps in its armor were filled with a radiation shielding liquid.[2][3] Because of these measures, its empty weight reached a grand total of 72 tons.[2]

A standard firearm for Zaku type MS, this model is the initial type of machine gun used by the Zaku series. A 100-round drum magazine is mounted on the right side vertically.

A portable, physical projectile-type firearm. It is primarily for anti-ship combat and displays its power in hit and run attacks. It can also be used against enemy mobile suits, but it is harder to hit a constantly moving target. During the Battle of Loum, many of the bazookas were loaded with nuclear warheads.

Since the MS-06C was anticipated to be used in nuclear assaults, radiation shielding liquid is injected into the back of the triple composite armor around the cockpit. After the Antarctic Treaty however, this equipment was determined to be deadweight, so it was excluded in the mass-produced (F-type) and all future Zaku variants produced during the rest of One Year War.

The MS-06A Zaku II First Mass Production Type, whose prototype unit was rolled out in August, U.C. 0077, proved itself to be superior to the MS-05B Zaku I in terms of performance, and was quickly approved for mass production. However, Kycilia Zabi was concerned about its lack of melee weapons, which would leave it vulnerable should the Earth Federation Forces develop their own mobile suits. She halted its mass production and ordered it to be redesigned. The result was the MS-06C, which entered mass production in January, U.C. 0078, just as the Principality of Zeon military was shifting to full wartime readiness.[1]

Many famous Zeon ace pilots began their career in the MS-06C, including Johnny Ridden, Shin Matsunaga, and Char Aznable. Notably, Ridden was able to sink three battleships in his MS-06C during the One Week Battle. The Black Tri-Stars also piloted the MS-06C when they captured General Revil during the Battle of Loum.[4] (Though various other sources depicted them as piloting the MS-06R-1A Zaku II High Mobility Type[5] or the Zaku I[6] during the battle.)

After the signing of the Antarctic Treaty, the MS-06C was succeeded by the MS-06F Zaku II, which was lighter than its predecessor due to the removal of radiation shielding, and was equipped with a generator with a higher output.[2] 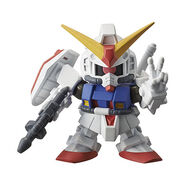