The MS-06BR Ballistic Zaku is a Gunpla appearing in Gundam Build Fighters: Battlogue. It was built by Meijin Kawaguchi and controlled by an AI version of Char Aznable.

The successor to the MS-06R-AB Zaku Amazing, Meijin Kawaguchi created the Ballistic Zaku by fine-tuning to the limit a regular MS-06S Char's Zaku II Gunpla from Mobile Suit Gundam: The Origin.[1][2] It is equipped with powerful new weapons such as funnels and a double beam tomahawk.[1] Additionally, the spike shoulder armor can be removed and worn over the fist like a boxing glove.[3]

Mounted on the right shoulder, it is a defensive armament for blocking attacks and is fitted with weapon latches.

A pair of vulcans mounted in the chest, they can be used to intercept missiles and restrict the movements of enemy units.

A large tomahawk-like melee weapon with dual beam blades.[2][3] Stored on the rear skirt armor, its shaft is folded when not in use.[2][3]

An axe-shaped melee weapon, its blade can be super-heated to cut through the armor of enemy units.[3] Stored on the right side skirt armor when not in use.[3]

The beam rifle used by the Ballistic Zaku resembles the MSN-04II Nightingale's.[3] Stored on the left side of the backpack, it is held in the right hand when in use.[3]

A remote controlled weaponry operated using the Psycommu System.[2] Three funnels are stored in a pod attached on the latches on the right shoulder's shield.[2][3]

A system used in the operation of remote controlled weaponry, it originated from the Gundam series that took place in the Universal Century timeline.

The Ballistic Zaku was used against Allan Adams' Reversible Gundam to test the battle system's newly implemented automatic control mode, which used quasi-personality AIs based on pilots from various Gundam works to pilot instead of a Gunpla Fighter.[3] It was piloted by a Char Aznable AI, who nearly defeated the Reversible Gundam, until the latter's controlling AI was replaced with an Amuro Ray AI, and the match subsequently ended in a draw.[3]

Does the famous kick (Battlogue 01) 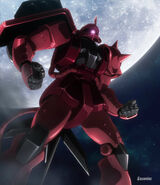 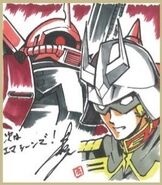 Retrieved from "https://gundam.fandom.com/wiki/MS-06BR_Ballistic_Zaku?oldid=444408"
Community content is available under CC-BY-SA unless otherwise noted.