The MS-05 Borjarnon Gavane Goonny Custom is a mobile suit used in the Correct Century timeline by the Luzianna Militia.

The custom Borjarnon, used by Suicide Team leader Gavane Goonny, has some exterior differences from the standard Borjarnon. The Borjarnon's armament consists mainly of four weapons: a bazooka, a standard machine gun, a heat hawk, and a cracker grenade. Though the Borjarnon's ammunition is no match for the armor of Moonrace suits like the JMA-0530 Walking Dome, it is effective against smaller suits like the MRC-U11D Walking Dumpling "WaD".

The Gatling Shield is a shield with a powerful, drum-and-belt fed, 75mm Gatling Gun attached to it. The Gatling Gun can detach itself from the shield when it runs out of ammunition. Appears on a customized Gunpla used by a 7th Military Academy member in Gundam Build Divers.

A sword-like weapon with a blade that is heated to high temperatures in order to increase its cutting capacity. Appears on a customized Gunpla used by a 7th Military Academy member in Gundam Build Divers.

As the war with the Moonrace begins in CC 2345, the Militia scrambles to excavate buried mobile suits to fight the Moonrace on equal footing. In North America's Luzianna fiefdom, the ruling Borjarno family uncovers two types of mobile suits in its mountain cycle: the MS-06 Borjarnon and the MS-05 Borjarnon Gavane Goonny Custom. It was later destroyed by a MRC-F20 SUMO as a decoy set up by Goonny, which allowed his teammates to ambush the Moonrace MS and destroy it. After that, Goonny switched to the same standard Borjarnon used by his teammates. 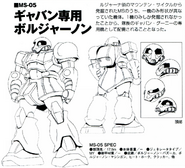 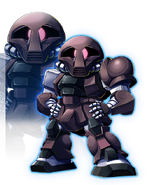 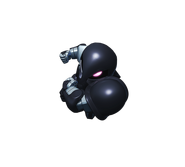