The MS-05S is a hastily modified version of the Zaku I that was supposed to be sent to the rear, such as a guidance maneuver battalion or supply unit, to fill the gaps left by the Zaku II, which was produced and deployed later than originally planned. The head is equipped with a blade antenna, and a round shoulder armor is added to the right shoulder. In consideration of cooperation with the Zaku II, leg verniers were added to compensate for the difference in thrust, and a large-capacity backpack was also equipped. Furthermore, its offensive and defensive performance has been improved with various additional equipment.

A standard firearm for Zaku type MS, this model is the initial type of machine gun used by the Zaku series. A 100-round drum magazine is mounted on the right side vertically.

A portable, physical projectile-type firearm. It is primarily for anti-ship combat and displays its power in hit and run attacks. It can also be used against enemy mobile suits, but it is harder to hit a constantly moving target

The main gun of the HT-01B Magella Attack main battle tank, it is remodeled as an MS artillery weapon. The Top Cannon was mainly used for long distance ground combat and can be loaded with HEAT or APFSDS rounds.

A new model assault rifle that appears to be an upgrade of the MMP-80 machine gun.

The same defensive armament as used by the MS-07B Gouf, it can be attached to the left forearm. Its main purpose is to defend in close combat rather than at long range. It also stores a melee weapon - the heat sword.

A melee weapon originally developed for the Gouf. Like the Zaku's heat tomahawk, the heat sword has blade that is heated to high temperatures to increase its cutting capacity. The heat sword is sometimes referred to as heat saber.

This machine was the personal mobile suit of Maj. Gerhart Schmitzer, the founder and leader of the Midnight Fenrir Corps. Before the One Year War, Schmitzer was already a decorated mobile suit pilot, and in the opening days of the war proved himself as a soldier. However, during an attack on a facility in New Guinea to clear the way for the Operation British colony drop, Schmitzer was severely wounded in action when a booby-trapped railgun facility blew up. Schmitzer survived, though his injuries prevented him from returning to active combat duty. Despite this handicap, Schmitzer persuaded Kycilia Zabi to create the Midnight Fenrir Corps. Migaki, who was the head of the maintenance team, modified a Zaku I that had been deployed in Fenrir's unit for work purposes. An acoustic sensor was added for Schmitzer, who has an sequela on his optic nerve. Aboard this machine, he defeated the far superior RX-78-6 Mudrock Gundam of the Earth Federation Forces, becoming the first pilot in history to defeat a Gundam with a Zaku. 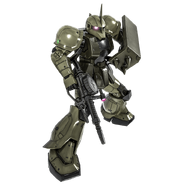 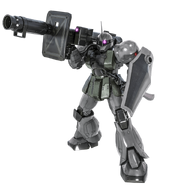 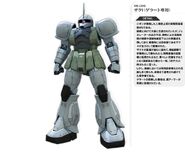