Template:Infobox/Mobile Weapon Ver.2 The MS-05Q Zaku I (Norris Custom) is a variant of the MS-05A Zaku I Early Type. It is piloted by Norris Packard from Mobile Suit Gundam: The 08th MS Team. It first appeared as a part of the MSV-R line. 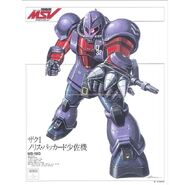