The MS-05L Zaku I Sniper is a variant of the MS-05B Zaku I. It first appeared as a part of Harmony of Gundam variations design by Hajime Katoki, but was also featured in Mobile Suit Gundam Unicorn and Model Suit Gunpla Builders Beginning G.

A retrofitted version of the MS-05 Zaku I, the MS-05L Zaku I Sniper Type's primary weapon was a beam sniper rifle, which was powered by a backpack-mounted sub-generator. Its head unit was fitted with the same type of composite monoeye as the MS-06E Zaku Reconnaissance Type, granting it the necessary sensor range for long-range sniping. It was also equipped with a pair of head-mounted Vulcan guns for defense. A foldable knee pad was installed in its right knee, which can deploy to stabilize the mobile suit during sniping missions. Essentially, the Zaku I Sniper Type was a self-propelled long-range mega particle cannon turret.[1]

A beam weapon developed by Zeon near the end of the One Year War, the beam sniper rifle is powered by a dedicated generator located in the backpack. When used in conjunction with the MS-05L's camera lenses, it is capable of long-range precision firing. The barrel overheats after several shots, and needs to be swapped out.[1] It appears to be from the same series as the MS-14G Gelgoog Ground Type's Prototype Beam Rifle.[2]

A large, backpack-mounted sub-generator developed from technology used in the MS-14C Gelgoog Cannon. It has a power output of 700kW, rivalling the output of the mobile suit itself. Due to a short development time, it has a long cooling time.[3] Though this problem can be solved by connecting it to an external cooling device.[1]

The Zaku I Sniper Type's right leg knee pad is unique in that when the mobile suit kneels down into firing position, the knee pad extends outward so as to stabilize the mobile suit not unlike a monopod on a rifle.

During the One Year War, Zeon's mobile suits mostly relied on Magella Top Guns for sniping, which lacked in both precision and firepower. After the death of Garma Zabi, Zeon forces on Earth requested a more effective long-range weapon. However, while the Zeon homeland experimented with the concept of using Psycommu all-range weapons for sniping missions, almost all support was cut off after the loss of Odessa.[3]

Using the portable beam weapon technology first developed for the MS-14 Gelgoog, California Base developed the Zaku I Sniper Type, using the outdated MS-05 Zaku I, which were mostly relegated to transportation and engineering duty, as the basis.[3]

During the final days of the One Year War, the Zaku I Sniper Type used guerilla tactics against the massive counterattack of the Earth Federation Forces, and contributed to slowing the EFF's advance. In December, U.C. 0079, one such unit was responsible for singlehandedly fighting off an entire GM squadron at S3 Point as Zeon forces prepared to evacuate California Base.[3]

One Zaku I Sniper Type is seen used in U.C. 0096, piloted by the Zeon remnants leader Yonem Kirks during their attack on Torrington Base. The Zaku I Sniper Type supported the Zeon remnant forces on the ground from the air inside a Fat Uncle Custom. Despite being nearly two-decades-old by then, it still proved to be quite effective, taking out multiple modern Federation units.

Ultimately, the Zaku I Sniper Type was cornered by Londo Bell's Tri-Stars team in their Jestas. With only one shot left, Kirks stabbed the beam sniper rifle into the suit's abdomen and attempted to detonate its backpack generator, but the Jestas manage to destroy the suit's arms and rifle before he could fire it, killing him as the suit fell to the ground after the Jestas shoot it.

In the series Model Suit Gunpla Builders Beginning G, the MS-05L Zaku I Sniper Type is the Gunpla model used by one of Koji Matsumoto's teammates and participates in the 3 on 3 battle against Haru Irei's team. 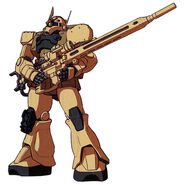 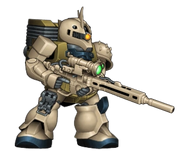 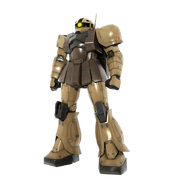 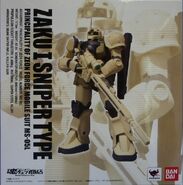