An improved version of the MS-03 prototype, equipped with a small thermonuclear reactor ZAS-X7, with mobility that is more than twice that of the MS-03. Armor is also enhanced, and finally it became an MS that could withstand actual battles.

The main armament of the Prototype Zaku is a 100mm machine gun called the “Zaku Machine Gun”, but the results of the simulations indicate that it is less effective in anti-ship combat, and the development of the Zaku Bazooka was soon underway. 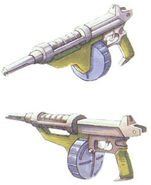