Developed by the Titans from the frame of the MRX-007 Prototype Psycho Gundam, the MRX-011 Mass Production Type Psycho Gundam is a space mobile suit to be used exclusively by their ace pilots. Considered a downsized version of the MRX-009 Psycho Gundam, this middle grade suit included a miniaturized psycommu system. However, most of the Newtype Research Institutes under Titans control were located on Earth, and had insufficient experience creating machines designed for space combat. Subsequently, Bask Om makes the decision to outsource the project to Anaheim Electronics' 4th Development Division. A test unit, the MRX-008 Prototype Psycho Gundam was entrusted to Anaheim as reference material. It featured a number of high-power beam weapons, including a powerful, large mega particle cannon. In addition, a modified psycommu system allowed the pilot to manipulate the wire-guided INCOM units for executing all-range attacks.

A high-output weapon, the power of the high mega buster's beam can seriously damage a mobile suit with even a glancing hit, and in some cases, total destruction.

Three mega scattering cannons are mounted on the torso of the MRX-011. They can blind the enemies for a short time, and even can tear through some Suits at point-blank range.

A remote weapon built into the hands and forearms of the MRX-011 Mass Production Type Psycho Gundam. The beam guns are built into the mobile suit's palms and multiple verniers and small scale thrusters are built into the forearm, allowing it to be launched and maneuvered independently of the mobile suit's main body. The forearms are connected by a guiding wire, similar to the MSN-02 Zeong and the MRX-010 Psycho Gundam Mk-II, that allows them to be quickly retrieved and supplies power, allowing the remote beam guns to be used indefinitely. These remote weapons are controlled through the quasi-psycommu system.

Beam Sabers are the standard close-range melee combat weapons employed by the majority of mobile suits ever developed. A E-cap charged weapon that emits high-energy Minovsky particles to form a blade-shaped I-field (via manipulation of electromagnetic fields), and then fills this I-field shell with superheated Minovsky particle plasma to produce an effective cutting blade. The I-field effectively contains the plasma and its heat, and can be used to block beams, but can be breached by physical objects allowing said object to be "cut" by the plasma. The sabers of the MRX-011 Mass Production Type Psycho Gundam have stronger output, and they also doubled as Beam Cannons.

A standard weapon of the time. These small grenades are not very effective against large ships, but are ideal mid-range anti-mobile suit weapons, or to put enemies off the scent.

The Quasi-psycommu system was developed to extend the capabilities of remote control to non-newtypes. This system can actively scan the pilot's brainwaves, no matter how weak they are, and then let the computer translate the thoughts into commands to be issued to remote weapons. Using the quasi-psycommu even non-Newtypes and normal humans can control simple wire-guided remote weapons, such as incoms. Incoms, unlike funnels or bits, still have to be tethered to their control unit by wires because the electrical signals to the incom would be otherwise disrupted by Minovsky Particles.

Some time after Anaheim Electronics' 4th Division had finished completing the first couple of prototype units, in an ironic turn of events, Char Aznable makes his Dakar speech in U.C. 0087 and the Earth Federation starts shifting its allegiance to the AEUG side. As a result of this, Anaheim's ties with the Titans becomes strained, and the delivery of the Mass Production Psycho Gundam units is halted. Though the exact facts are not certain, a battle takes place between AEUG pilot Cliff Fleming in the FA-00100S Full Armor Hyaku Shiki Kai and two MRX-011 units near the industrial city Epsilon (where Anaheim Electronics' 38th plant is located) on the Moon on November 20, UC 0087. 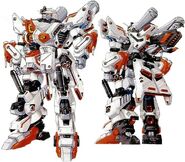 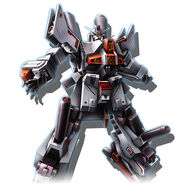 Retrieved from "https://gundam.fandom.com/wiki/MRX-011_Mass_Production_Type_Psycho_Gundam?oldid=466079"
Community content is available under CC-BY-SA unless otherwise noted.