The MRX-010 Psycho Gundam Mk-II (aka Psyco Gundam Mk-II) is a transformable mobile armor that appears in Mobile Suit Zeta Gundam and its sequel Mobile Suit Gundam ZZ. It was originally piloted by Titans' Rosamia Badam and subsequently by Neo Zeon's Ple Two.

An improvement over the original MRX-009 Psycho Gundam, the MRX-010 Psycho Gundam Mk-II was also equipped with a psycommu and psycho-control system to allow its Newtype or Cyber Newtype pilot to control this massive mobile weapon with mere thoughts. It also inherited its predecessor's ability to transform into a "Mobile Fortress" mode as well as the Minovsky craft system for atmospheric flight. The Psycho Gundam Mk-II was however more energy efficiency and more deadly, it has a greater amount of weapons that have higher power ratings, despite having a fusion reactor that only produces little over half of what the Psyco Gundam was capable.

Two small mega beam cannons are mounted in the forehead, and can be even used when the head functions as an escape pod.

Not only can the forearms detached and be directed at a targets via a cable connection, they can also emit a large beam sword each, allowing an all-range melee attack. Power rating of 1.7 MW each. The detached forearm is controlled via the Psycho Gundam Mk-II's psycommu system.

The fingers of the Psycho Gundam Mk-II each contain a beam cannon, for a total of 10 beam cannons.

The Psycho Gundam Mk-II can carry a number of special reflector bits in its backpack. Unlike the bits developed by Zeon, these were not equipped with a beam emitter. Instead they were used to redirect Psycho Gundam Mk-II's beam to create all range attacks, and to hit targets that are out of sight. They can also be used defensively to redirect enemy fire.

As with its predecessor, the Psycho Gundam Mk-II is capable of using a shield with similar functions, including the ability to split in half and be mounted on the lower sides in Mobile Fortress mode.

The Psycho Gundam Mk-II's cockpit is located in its head, much like Zeon's Zeong. Similarly, the head could detach and be operated independently of the body to be used as an escape pod.

A Psycommu is a device connected directly into the user's thoughts, through which the user can manipulate it by using his/her mind. In essence, a psycommu system works by passively scanning the brainwaves of Newtypes, amplifying them in order to send the brainwave signal out long distances, and then translating these brainwaves into raw machine codes upon being received by the selected object with limitations. Since brainwaves are not affected by the radio interference property of Minovsky particles, at first it was mainly used to mentally control remote weapons via Minovsky Communication, usually mounted with a single beam gun. This enabled the resurrection of BVR engagements, with bits and funnels being the first weapons able to engage targets without visual contact since the development of the minovsky particle.

First installed in the second unit of the Psycho Gundam, this system allows the pilot to control the unit externally via the Psycommu System.

Almost a year later, in U.C. 0088, Neo Zeon forces retrieved the wreckage of the Psycho Gundam Mk-II and rebuilt it.[2] During its transportation, it was briefly activated by the nearby presence of Newtype Elpeo Ple.[3] It was then piloted by their own Cyber Newtype pilot, Ple Two, in their war against the AEUG. However, after a lengthy battle in the aftermath of the Dublin Colony Drop, it was finally destroyed by the MSZ-010 ΖΖ Gundam, but Ple Two survived by escaping in the detachable head unit.[4] 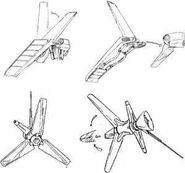 Cameo in Gundam Build Fighters Try, with colors resembling the J-Ark from King of Braves GaoGaiGar 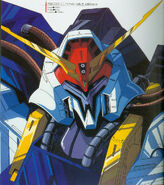 A trio of Titans' Psycho Gundam Mk-II as seen on Gihren's Greed: Menace of Axis V 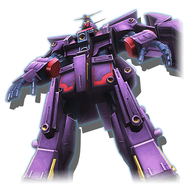 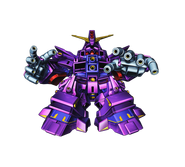 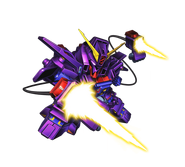 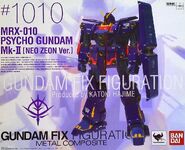 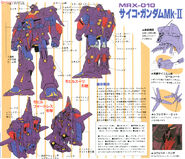