The Prototype Psycho Gundam was developed with the goal of creating the "ultimate Gundam" using technology from both the Federation and Zeon. Using the RX-178 Gundam Mk-II as its base, the Prototype Psycho Gundam was equipped with wire-guided forearm beam guns, similar to the MSN-02 Zeong, and a scattering mega particle cannon was installed on its chest. It can be controlled using a psycommu system located in the backpack.

However, the output of the additional generator powering the mega particle cannon was unstable, causing the machine to be immobilized for 10 seconds after firing it. The massive psycommu system installed in its backpack also greatly increased its weight, hindering its mobility. In the end, it failed to achieve its goal.

In U.C. 0087, one unit was test piloted by Cyber Newtype Third Murasame after its original test pilot, another Cyber Newtype, was hospitalized due to severe mental trauma. It engaged in a mock battle against a squadron of ten RMS-108 Marasai and RMS-179 GM II, three manned and seven unmanned, led by Lieutenant Yuji Shiina. Ten minutes into the mock battle, the Prototype Psycho Gundam was able to defeat four of the GM II. However, Third Murasame went berserk due to sensing the negative emotions of the other pilots, and began destroying the opposing mobile suits using live weapons.

Shiina furiously questioned the control room why live weapons were being used, but the only response he received was an order to capture the Prototype Psycho Gundam undamaged. Using the unmanned units as shields, Shiina tricked the Prototype Psycho Gundam into firing its mega particle cannon, and stabbed its abdominal generator with his beam saber while it was immobilized, destroying it and killing Third, who briefly remembered that "Third" was not his real name before his death.

A week after the incident, Third was promoted posthumously while Shiina resigned from the military. A new Psycho Gundam - upscaled to 40 meters and equipped with a Minovsky Craft - was dropped off at the base, along with its pilot, Four Murasame. 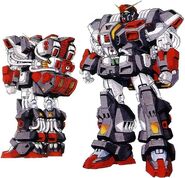 Retrieved from "https://gundam.fandom.com/wiki/MRX-007_Prototype_Psycho_Gundam?oldid=466067"
Community content is available under CC-BY-SA unless otherwise noted.