The MRC-U11D Walking Dumpling "WaD" (aka "Armadillo", as colloquially referred to by the Militia groups) is a mobile suit that appears in the Turn A Gundam series.

The MRC-U11D Walking Dumpling "WaD" is an anti-personnel suit used by the Moonrace. The petite mobile suit is also used as a cargo transport unit. Thanks to the odd design of the WaD's spine, it is highly mobile and can peek around corners or over cliffs with its upper torso. Armed with several machine guns, the WaD is ideally suited for combat against ground forces. The WaD can also be equipped with weapons such as a gatling machine gun, joint buster and rocket grenade launcher to attack larger mobile suits.

During the invasion of Inglessa by the Dianna Counter forces, the WaD is often deployed alongside the much larger JMA-0530 Walking Dome. Because of its small size, the WaD is more susceptible to damage from primitive Earth weapons. Many WaD units are also captured by the Inglessa Militia, repainted red and given the nickname "Armadillo". 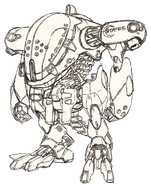 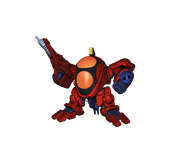 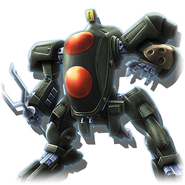 About to be shot by Borjarnon

Retrieved from "https://gundam.fandom.com/wiki/MRC-U11D_Walking_Dumpling?oldid=463474"
Community content is available under CC-BY-SA unless otherwise noted.