The MRC-C03 Bellona is a worker mobile suit that is featured in the anime series Turn A Gundam.

The MRC-C03 Bellona was a worker mobile suit built and operated by Moonrace civilians. They were primarily used to carry boxes and similar manual labor tasks, and for added stability they had a tail. Since the Bellonas were designed for labor, they carried no weapons.

The Moonrace citizens used Bellonas in riots on the lunar city of Ghengnham when the long-forgotten Dark History was revealed to the public. They were also used by Gym Ghingham's forces to excavate the CONCEPT-X 6-1-2 Turn X and G-M1F Bandit from the mountain cycles located on the Moon's surface. 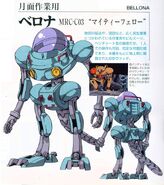