The MR-SPI05Ω"Jet Stream" (aka "Mobile Rib") is a mobile suit that appears in the Turn A Gundam series.

The Jet Stream possessed a pair of pincers to use for construction and other labor purposes, while not designed for battle they could be used for grappling.

To allow the Jet Stream to participate in battle the Militia would optionally equip some units with five long range cannons, with three installed in the abdomen and two on the arms.

When the Dianna Counter forces arrived on Earth to begin colonization in C.C. 2345, they brought a variety of mobile suits with them, including the MR-SPI05Ω"Jet Stream" aka "Mobile Rib", which was mainly used for construction and labor purposes. In the early days of the war, the Inglessa Militia seizes several Jet Stream units and attempts to use them in combat, these units would be repainted red. The Jet Stream is also used by Moonrace citizens who have decided to live alongside the people of Earth. In one incident, a Jet Stream is used for a town festival to create a float based on the SYSTEM ∀-99 (WD-M01) ∀ Gundam for a river parade. Unfortunately, the sight of the ∀ Gundam triggers a relapse in mentally unstable Moonrace pilot Corin Nander, who steals a Jet Stream and attacks the float, which he has mistaken for the real thing. 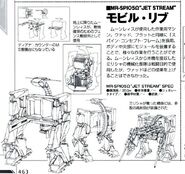