A customized machine based on the Hyakuren sold by Teiwaz, its armor is lightened in consideration of operating under gravity.[1] Unlike the Hyakuren which is for anti-MS battle, the Triaina specializes in using its overwhelming combat ability to assassinate VIPs using hit and run tactics.[1][2] Its sensors were enhanced, and in terms of weapons, it carries two folding knives in its shoulder armor, and can use an assault rifle as its ranged weaponry.[2]

The mobile suit appeared in Avalanche Colony in an attempt to assassinate Daddy Ted, but was defeated when Argi boarded the ASW-G-29 Gundam Astaroth and fought it off. The pilot then committed suicide to erase any potential evidence of the assassination. 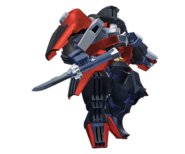 Retrieved from "https://gundam.fandom.com/wiki/MPM02/AC_Triaina?oldid=450308"
Community content is available under CC-BY-SA unless otherwise noted.