The Oggo is a mobile pod from the side story Mobile Suit Gundam MS IGLOO: Apocalypse 0079.

Towards the end of One Year War, Zeon lost most of their resource bases on Earth and lacked the materials to continue mass-producing mobile suits in the same numbers as earlier in the war. In order to field more troops against the Earth Federation Forces, the MP-02A Oggo was designed by the Zeon Engineering Division as a "decisive battle weapon." By taking advantage of the integrated project implemented in the production lines of several manufacturing companies, building the Oggo does not interrupt regular procedure and it was formally accepted into mass-production without any debate.[1] The Oggo used parts intended for the Zaku such as the generator of the J-Type Zaku II, which was no longer considered necessary due to Zeon's retreating front.[1] Its development was also inspired by the success of the RB-79 Ball.[1]

The MP-02A Oggo is a mobile pod unit that can equip early mobile suit weapons. The cost of each Oggo is about half of a MS-06 Zaku II. The primary shape of its design is a cylinder bisected by a standard 3-panel cockpit in the middle of the cylinder, and possessing a monoeye sensor above its cockpit. On both cap-ends of its cylindrical body are multipurpose turrets that can rotate 360 degrees, and allows the Oggo to mount and use Zaku-type hand-held weapons with the exception of the heat hawk. Typically, on its left is a 6-tube missile pod, commonly armed with anti-ship missiles, while on its right it is equipped with the machine gun or 280mm Bazooka. These turret mounts, however, are prone to jamming due to the low-quality construction of the Oggo. For melee purpose, it was given a pair of extendable claws; the pivot points are mounted beneath the main body at both ends, which can be folded parallel along the length of Oggo during launch. During mass launch, it can be mounted onto an elongated structure that can spin around, allowing the Oggo to be deployed rapidly. While it had been said that it has higher mobility than RB-79 Ball, this has not been truly proven.[2]

Like the RB-79 Ball, the Oggo has manipulator arms that can be used in close-range combat which seem fairly effective against other mobile pods. These expand and fold out from the pod when used.

On each side of the Oggo there is a turret with 360-degree rotation and hardpoints for various standard Zeon mobile suit armaments used by MS-06 Zaku II units.

The Zaku II's standard machine gun, it has rapid fire capability but it has trouble penetrating tough armor.

That Zaku II's standard bazooka, it fired explosive rounds that were quite effective against the armor of Earth Federation battleships. However the bazooka could only be loaded with a single round at a time, thus it had to be used carefully.

A simplified, disposable rocket launcher. It is commonly used by Zeon mobile suits in the late stages of the One Year War. As the warhead is not equipped with a guidance device, it is extremely hard to use the Sturm Faust to hit a moving target accurately. However, it is still a highly destructive weapon. Each mount can hold up to two Sturm Fausts.

A number of units and fresh-grads from the military school with 250 hours of flight experience are assigned to the 603 test team. The first sortie (operated by a team of three units that were piloted by Erwin Cadillac, Freidrich Catell, and Franz Bland) is a lunar-orbit patrol mission, which leads to an engagement against a group of 6 RB-79 Ball. In the ensuing dog-fight, only a greatly damaged Ball and Cadillac's Oggo remained. While the Ball was eventually captured by Cadillac, both were destroyed under the fire of two Salamis-class cruisers, the motherships of the Ball units.

Not long after, the 603 test team are assigned to defend the E-field (the side that faces the sun[3]) of A Baou Qu. With the help of support unit MA-05Ad Big Rang, many Oggos are able to extend their combat duration, allowing numerous of these Oggo pilots to escape from certain death. It has been derogatorily referred to as "monster drum can" and "trash of Zeon" by Earth Federation Forces soldiers.[1] 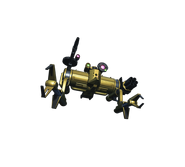 As seen in Advance of Zeta Re-Boot: Gundam Inle 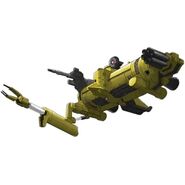 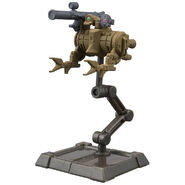 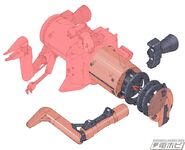