MO-V is a resource satellite, industrial colony, and space exploration outpost located at the edge of Lagrange Point 5.[1] It is the primary setting of New Mobile Report Gundam Wing Dual Story: G-Unit. Located on the other side of the asteroid belt, further than any other colony from Earth. It possesses a population of 100,000.

Though it was originally going to be a major port for extra-planetary travel, the untimely death of Mark Bernett has led to MO-V reorganizing its functions and to specialize in the manufacturing of mobile suits. Swayed by Lady Une's speeches to the colonies as part of OZ's effort to bring them into the fold, MO-V's leadership signs on almost immediately and decides to join them. However, its exact usefulness to OZ is debated until their reconnaissance learns that the colony has built powerful new prototype mobile suits called G-UNITs. Upon discovering this, the Romefeller Foundation orders the special forces group OZ Prize to capture the G-UNITs while forbidding any regular members of OZ from investigating.

In the ensuing war, OZ Prize completely isolates the colony from the outside world by jamming all of MO-V's communication lines, embroiling it in a conflict for its very survival. 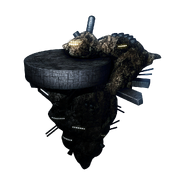