MMS-01 Serpent is a mass-produced heavy assault mobile suit by the Barton Foundation. The unit is featured in OVA/movie New Mobile Report Gundam Wing: Endless Waltz. It was designed by Hajime Katoki.

A direct successor of the Leo, the Serpent was designed with the intention of being usable both on Earth and in space without having to switch equipment, as the importance of space combat became much more apparent after the appearance of the Operation Meteor Gundams.[1]

The only fixed armament installed on the Serpent were two 8-tube missile launchers, one mounted in each shoulder. Besides these launchers, the suit could carry a variety of hand weapons, including a bazooka, a beam cannon and a double Gatling gun, similar to the ones carried by the improved XXXG-01H2 Gundam Heavyarms Custom. Despite these strong weapons the Serpent lacked any close combat weapons, putting the suit at a disadvantage if any enemy was able to come into close proximity to the suit.

Defense wise, the Serpent was built using an alloy known as Neo-Titanium, a material that is half as light and twice as strong as conventional Titanium alloys. The Serpent's cockpit is identical to the Leo's aside from enhanced targeting and lock-on systems, allowing its pilot to better make use of the suit's weapons.

Medium-sized missiles equipped on both shoulders. When not in use, the shoulder armor closes up, concealing the missiles. It is the only fixed armament installed on the mobile suit. They possess enough power to destroy a MS.

A double-barreled Gatling gun nearly-identical to the ones used by the Gundam Heavyarms Custom, these weapons fire projectiles at a rapid rate. When not being used, it is attached to the storage rack on the back of the mobile suit. Unlike the Heavyarms Custom, most Serpents only carried one Double Gatling Gun. It was originally scheduled to be equipped with another firearm, but the production line was changed by the transition to the Barton Foundation.

A weapon of destructive force that is held over the shoulder of the Serpent when firing. It is stored on the storage rack on the back of the mobile suit when not being used.

A handheld beam weapon, it is stored on the storage rack on the back of the mobile suit when not being used. While it does not have a high rate of fire, it makes up for it with sheer power. It was derived from the beam cannons of the OZ-13MSX1 Vayeate and OZ-02MD Virgo[2] (or the mega beam cannon of the OZ-00MS2B Tallgeese III, according to earlier sources[1]). The round parts at the back of the cannon is the generator.

A simple easy to reach storage rack that is placed on the back of the mobile suit. Its holds the double gatling gun, bazooka, and the beam cannon when they are not needed in battle.

Optional equipment used for descent, attached to the back.

After the appearance of the Gundams, the United Earth Sphere Alliance began developing the Serpent at the L3 colony of X-18999 and prepared to mass produce it there as well, an effort apparently funded by the Barton Foundation. However, when the war ended in A.C. 195, its development was halted. Taking advantage of the post-war chaos, the Barton Foundation took over the production lines.[1]

Since then, the Barton Foundation began secretly mass producing the Serpent with the reconstruction budget of X-18999, to be used in an attack on the now-pacifistic Earth Sphere Unified Nation. 500 Serpent units were produced in total.[3]

Trowa Barton briefly piloted a Serpent while infiltrating the Mariemaia Army, although he abandoned it in favor of his Gundam after escaping X-18999. In Brussels, the Tallgeese III and Noin's Taurus, as well as three Gundams (Deathscythe Hell, Heavyarms, Sandrock) fought a hard battle against more than four hundred Serpents. The Gundams and the Preventer mobile suits managed to disable most of the Serpents, leaving only around fifty, before exhausting their energy and ammunition. Following the death of Dekim Barton, the remaining Serpents dropped their weapons and surrendered.

After the end of the rebellion, Quatre mentioned that the Winner Family planned to melt down all remaining Serpents into Neo-Titanium and use them to reinforce colony walls.[3] 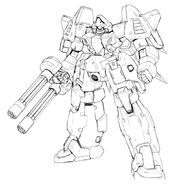 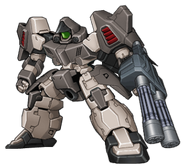 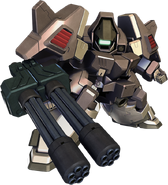 Retrieved from "https://gundam.fandom.com/wiki/MMS-01_Serpent?oldid=496218"
Community content is available under CC-BY-SA unless otherwise noted.