The Load Astray Double Rebake is a Gunpla created through a collaboration between Koichi Nanase and Tsukasa Shiba, a pair of inseparable Divers.[1][2] It is without the concept of front or back, and its abilities allow both of its sides to function as the front or back.[1] The unit has a two-seat structure and is controlled by a different Diver when it changes between the Cuadro mode, a mode that focuses on ranged attacks and has standard capabilities, and the Reverso mode, a mode that specializes in melee combat.[1][2] This enables one single unit to display two totally different battle styles.[1][2] In other words, opponents attacking it from the back would face a totally different machine.[1] The Cuadro mode is piloted by Koichi, while the Reverso mode is piloted by Tsukasa, and the Gunpla's head transforms when switching between the two modes.[1][2]

Gauntlet-type weapons equipped on both arms.[1] They can generate high-powered beam blades from the tips during Cuadro mode and function as huge forearms during melee combat in Reverso mode.[1]

A pair of high-powered firearms mainly used in Cuadro mode, they are mounted on the side of the shoulder armor.[1] They are used as active binders for attitude control in Reverso mode.[1]

A pair of wired, hook-shaped weapons mounted on the front of the shoulder armor.[1] They can capture opponents after stabbing them and be used in other ways depending on the Diver's creativity.[1]

Koichi Nanase and Tsukasa Shiba were originally planning to build two Gunplas specialized in their respective battle styles, but Koichi proposed an idea to combine the concepts into a single unit.[1] Tsukasa was against this idea, but eventually succumbed to Koichi's enthusiasm.[1] 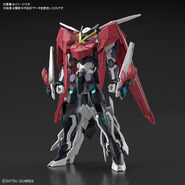 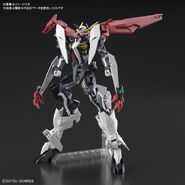 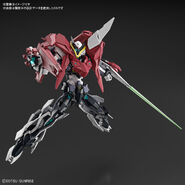 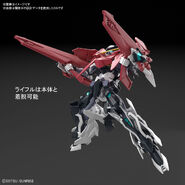 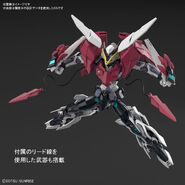