The MBF-PNN Gundam Astray No-Name (ガンダムアストレイノーネイム, Gandamu Asutorei Nō Neimu?) is a Gunpla appearing in Gundam Build Divers based on the Gundam Astray. It is built and piloted by Tsukasa Shiba.

The Gundam Astray No-Name is specialized for the GP Duel (aka GPD, Gunpla Duel), an older system for Gunpla Battle in which Gunplas fight each other in the real world, and Tsukasa had used it in over 500 battles.[1][2][3] Each time Tsukasa lost, he repaired, customized and improved it into its current form.[1][2] Based on the Gundam Astray, its most characteristic equipment is the 'No-Name Unit' which Tsukasa created based on his experiences in GPD.[2][4] The No-Name Unit not only has advanced offense and defense capabilities, but also has the "n_i_t_r_o System" from the MSN-001X Gundam Delta Kai featured in UC-MSV, which increases the fighter's ability.[2][4]

A handheld weapon that emits a blade-shaped beam for close combat.[1] Stored on the Gundam Astray No-Name's back when not in use.[1]

Mounted on the right forearm, this gauntlet-type weapon generates a high-powered beam blade form its tip.[1][2]

A composite armament with advanced offense and defense capabilities, it can switch between various modes, each with different functions.[1][2] The No-Name Unit was based on the concept of the Armed Armor series featured in Mobile Suit Gundam Unicorn.[5]

The No-Name Unit's basic configuration, it is also a defense mode where the unit covers the right-half of the Gunpla's body like a pelisse.[1][2] The unit's durable armor not only can withstand physical attacks, but also has a powerful beam coating to defend against beam attacks.[1][2]

A shooting mode where the No-Name Unit unfolds around the right arm and adopt a cannon-like form for mid-to-long range attacks.[1][2] The mode's beam is fired from the emitter of the Gauntlet Saber.[1]

A mode where the No-Name Unit attaches to the tip of the Gauntlet Saber and turns into a giant claw to grab a large weapon or to crush the enemy.[1]

A final attack mode that is activated when the n_i_t_r_o System is deployed, the parts of the No-Name Unit spread out on the Gunpla's back and emit blue flames.[1][2] Furthermore, the twin antennas protruding from the front of the Gunpla's head also flip backwards.[1][2] Also known as 'Super Mode', it also allows five parts of the No-Name Unit to separate and function as 'Blade DRAGOONs' – remote controlled blades that can be freely manipulated to ram or chop up the opponents.[1][2][6]

Originally used by the MS-09R-2 Rick Dom II, the Gundam Astray No-Name pulled this weapon out of the ground of the battlefield.[1] This is a prototype heat weapon designed specifically for anti-ship warfare, and its large size and high output allows it to slice warship in two.

First featured in the Gundam Delta Kai from the UC-MSV series, the newtype injection trace reformed oldtype System forcibly enhances the pilot into a Cyber Newtype.[2] In the GP Duel setting, the system analyzes the field of the Gunpla Battle and gives feedback to the pilot, simulating a shortened reaction time.[2] Like the system's original UC-MSV setting, the Gundam Astray No-Name produces blue flames when the system is activated.[1] In addition, using this system also causes the No-Name Unit to switch into X-CONNECT Mode.[1][2]

There’s another face on the back of the head, and it is used as a high precision sensor and a spatial analytical unit.[1][2]

History of the Gundam Astray No-Name can all be found on Tsukasa Shiba's page. 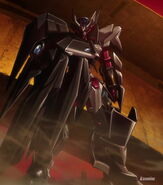 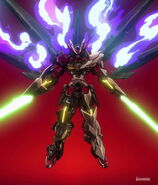 Saving RX-Zeromaru from Raid Boss before taking off (Ep 25)

Back to back with Galbaldy Rebake (Ep 25) 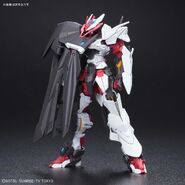 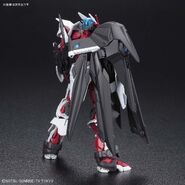 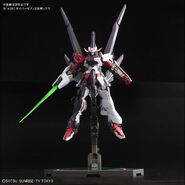 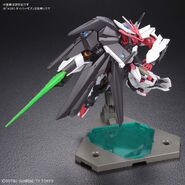 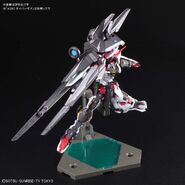