After its defeat by MBF-P03D Gundam Astray Blue Frame D, the Astray Noir minus its Noir Striker was recovered by the mysterious organization, The Clan, and equipped with the Destiny R Silhouette that was obtained through unknown means. The letter 'D' added to its name stands for 'Destiny' and is likely a reference to the Silhouette pack, while the word 'Noir' is retained as the suit is still black in color. The suit was then given to Elsa Weiss, Dante's partner. To match Elsa's piloting preference, various parts of the MS have been adjusted and its mobility is enhanced as a result. Although the pair of Sword Pistols remain as its main weapons, its combat style is different.

A weapon that combines a sword with the Strike E's M8F-SB1 "Shorty" beam rifle, Astray Noir D stores a pair of them on the side armors when they are not in use.

A pair of beam cannons mounted on the Destiny R Silhouette, they are developed from Blast Impulse's "Kerberos" beam cannons. Thanks to the new technology used in creating them, the "Wolfsbane" long range beam cannons retain the same firepower as its predecessor despite being lighter and more compact. The cannons can be positioned over or under the shoulders when in use, but they can also be detached and used as handheld weapons instead. 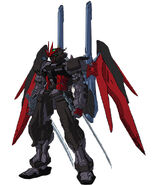 Retrieved from "https://gundam.fandom.com/wiki/MBF-P0XD_Gundam_Astray_Noir_D?oldid=450171"
Community content is available under CC-BY-SA unless otherwise noted.