The Astray Mirage Frame 2nd Issue is an upgraded MBF-05LM Gundam Astray Mirage Frame developed by the Librarian Works. It was introduced in the photo series Mobile Suit Gundam SEED VS Astray and is piloted by a Carbon Human copy of Rondo Gina Sahaku.

Build upon the damaged MBF-05LM Gundam Astray Mirage Frame, the Mirage Frame 2nd Issue specializes in super close range combat. It existed as simulation data for some time but was not immediately manufactured due to its dangerous performance which even Coordinators could not handle. Gina could only pilot it after his body had undergone some experimental modifications.

The Mirage Frame 2nd Issue has the original Mirage Frame's special Mirage Colloid system, but its transformation mechanism is altered to become more extensive. It usually appears in Tyrant Mode, and can switch to a four-legged close combat form known as Brute Mode, which is developed using data collected on the TMF/A-802 BuCUE and ZGMF-X88S Gaia Gundam. The new hip parts installed for the transformation into Brute Mode also benefited the Tyrant Mode, increasing its reaction speed among others.

The Brute Mode is an evolved version of the original Mirage Frame's Gladiator Mode and usable on the ground and in space. Its maneuverability and mobility far surpasses that of normal humanoid MS, making it almost next to impossible to be hit by projectile weaponry and barely allows opponent(s) to counterattack. The Brute Mode also allows the Mirage Frame 2nd Issue to launch the deadly special attack, the "Brute Force Attack", which gives the impression of being attacked by multiple units.

Mounted in the Mirage Frame 2nd Issue's head are two "Igelstellung" 75mm multi-barrel CIWS guns. These light projectile weapons are classified as Anti-Air, and can be used to intercept missiles, destroy lightly armored vehicles, etc. Usable only in "Tyrant mode".

Stored on the Brute Head unit on the suit's back, the two beam sabers are used only during "Tyrant Mode" where they serve as throwing weapons as the suit already has various close combat weaponry.

Full name - Compact Sword Anklet Type, it is a set of three claws mounted on each foot. They are shorter than the original Mirage Frame's A Swords, but have a higher level of toughness.

Full name - Compact Sword Bracelet Type, it is a set of three claws mounted on each hand. Most effective when deployed in Brute Mode, they have terrifying destructive power when used with that mode's super high speed movements.

A pair of beam rifles mounted on the shoulders, they rotate forward when in "Brute Mode" and are most effective when used in that mode. Through the use of colloid technology, they can generate a magnetic field for bending the fired beam. This is a modified, offensive version of the GAT-X252 Forbidden Gundam's Geschmeidig Panzer system. However, as the equipment used is miniaturized, the rifles' attack range is short. Thus, they are used exclusively in super close range combat.

A pair of powerful beam sabers mounted on top of the Brute Head unit on the suit's back. They are usable only in "Brute Mode", where they function as a pair of forward facing fangs to tear apart enemy units.

The Mirage Frame 2nd Issue can optionally use the same beam rifle as the Mirage Frame when in "Tyrant Mode" for ranged attacks. However, it is rarely equipped due to the suit's specialization in super range close combat.

The Mirage Frame 2nd Issue can optionally use the same shield as the Mirage Frame when in "Tyrant Mode" for defense. However, to keep the MS mobile and agile for super close range combat, this shield is rarely equipped. When equipped, it can be stored on the back.

In Brute Mode, the Mirage Frame 2nd Issue can circle an enemy unit at extremely high speed and then launch an attack randomly. This caused the enemy pilot to have the impression of being surrounded and attacked by multiple units.

Mounted on the suit's back, it extends when in Brute Mode and serves as that mode's head unit. This equipment utilized the ability of the prototype Gundam Astray unit to mount additional equipment on the mobile suit's back. It contains the Brute Mode's Melee-Combat Sensors, and is armed with two beam sabers and two saber fangs. Can be removed and utilized by other mobile suit, granting the use of the mounted sensors and weaponry.

Mounted in the Brute Head unit, the sensors sacrifice long-range data gathering functions in exchange for optimum efficiency in close-range. Unlike Mirage Frame, Mirage Frame 2nd Issue do not need to be accompanied by another MS to remedy the weakness of this system. Its Brute Mode is fast enough to evade any possible ranged attacks.

The protrusion on the head is a mirage colloid sensor antenna, this is an enhanced version of what is equipped on the Mirage Frame. The antenna can spread mirage colloid particles around the suit and through them sense the movement of enemy units nearby, even those that are cloaked can be detected. 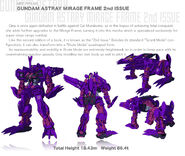